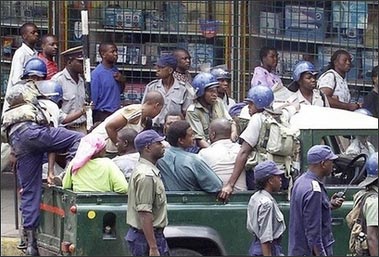 A local human rights advocacy group Crisis in Zimbabwe Coalition (CiZC) has expressed concern over what it says is the continued use of the judiciary to suppress opposing voices.

The worry comes after MDC Alliance Councilor for Chiredzi Ward 18, Gilbert Mtubuki was yesterday arrested on charges of gathering with intent to cause public violence.

In a statement Tuesday, CiZC said they are concerned by the continued arrests and detention of opposition and civic society activists on weak charges.

“Crisis in Zimbabwe Coalition is appalled by the continued weaponization of the judiciary to clampdown on dissenting voices. Our concern arises from the continued arrests and detention of opposition and civic society activists on flimsy charges.

“It is quite apparent that the State has adopted persecution by prosecution as a tool to silence and victimize opposition and civic society activists and the continued arrests are part of a ploy to decimate the opposition while instilling fear among opposition supporters,” reads part of the statement.

CiZC said the situation has been worsened by capture of the judiciary which it says is an attachment of the ruling Zanu PF party.

“This has been worsened by the capture of the judiciary, a situation that has seen the courts acting as more of an appendage of the ruling party, Zanu PF and in the process, aiding rights violations. In many cases involving bail applications for incarcerated opposition and civic society activists, the High Court has often pointed a miscarriage of justice on the part of the lower courts.

“We reaffirm our position that an independent judiciary is critical for democracy to prevail and the State must guarantee independence of the judiciary. Judicial capture in Zimbabwe has worsened the shrinking of the democratic space while aiding violation of fundamental rights enshrined in the constitution,” said CiZC.

The Coalition says it implores the State to respect citizens fundamental rights enshrined under Chapter 4 (Declaration of Rights) of the Zimbabwean constitution and desist from persecution by prosecution.

Public Warning from EcoCash Against Fraud