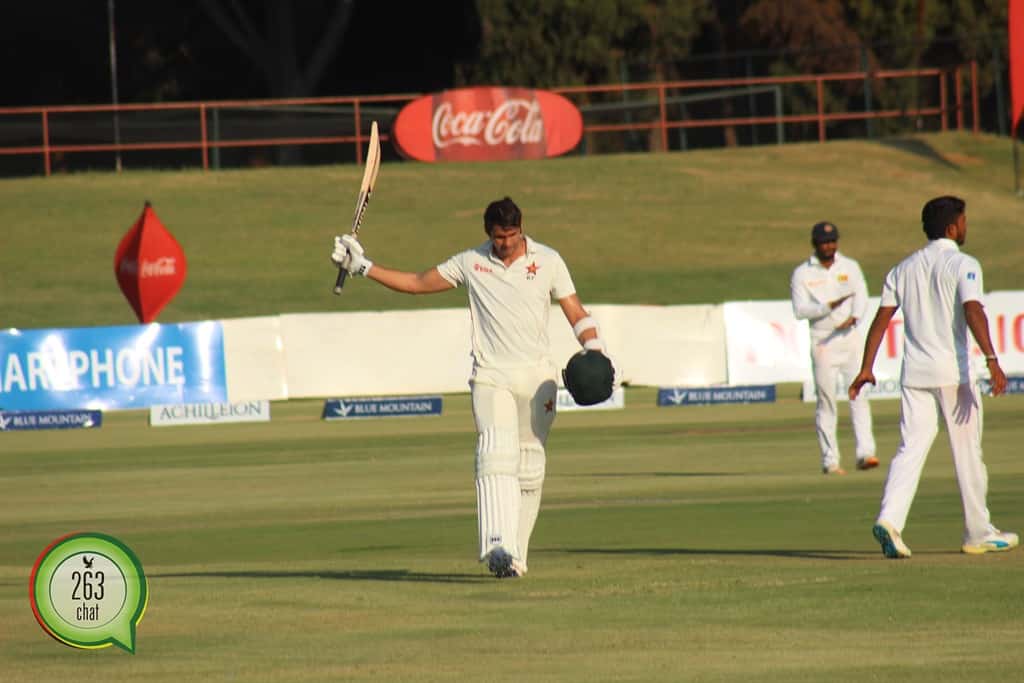 A fantastic rearguard effort from Zimbabwe Chevrons led by Graeme Cremer’s maiden Test ton, helped the hosts avoid a follow-on and post 373 all-out after slumping to 139 for 6 earlier in the morning.

Batman Peter Moor put his wicket keeping woes behind him to contribute with an 84-ball 79 and Donald Tiripano struck a composed 46 runs.

Cremer, batting at number 8, played an attritional Test innings, waiting for anything overpitched. The highlight of Cremer’s innings was his discipline with straight-bat strokes, milking the spinners, particularly with the spin to long-on or square on the leg side.

On 58 runs, Cremer was dropped at backward square leg by Asela Gunaratne. Other than that opportunity, Cremer looked impregnable with a tight defense – bat close to body, head over the ball and a good judgement of balls to play. Such was his fluency that his hundred never looked in doubt. Suspense arose around the ground when he needed number 11 Chris Mpofu to block out one delivery from Rangana Herath.

Commenting on his maiden hundred, the skipper said “It has not sunk in yet. When play began, we wanted to get past the follow-on score that was the main thing for us. But then, after I got fifty-sixty, I thought there could be a chance here and it just was my day today. We were struggling a bit in the morning and just to get us back into the game that was a big thing for me.”

Cremer added “We ideally want to slow the game down a little bit. We’ll go with in-out fields tomorrow; we don’t want them to score too quickly and then we have too much time to bat, because we think that tomorrow the wicket might get quite tough to bat on.”

PJ Moor was more selective in his choice of shots, opting to loft the spinners straight as opposed to opting for cross-bat strokes. He used his feet effectively and hit the slower bowlers through the line in the arc between long-off and long-on. When the bowlers compensated with a shorter length, the cut shot was productive.

He reached his fifty off 49 balls, thereby forcing Herath to dispatch fielders to the boundary. At one point, Herath had five deep fielders off his own bowling.

Just when Moor looked set for his maiden Test ton, debutant Lahiru Kumara worked him over with a pair of outstanding bouncers on a slow pitch. The first, directed at the neck, caused Moor to fend awkwardly.

Kumara continued to trouble the batsmen with extra oomph in a testing spell. Cremer survived a nasty moment when Kumara’s bouncer hit and subsequently detached his helmet, which fell perilously close to the stumps.

He added 92 with No. 9 Donald Tiripano, who was equally adept at keeping out the straight deliveries and accumulating runs against Sri Lanka’s tiring spinners. Against the run of play, Tiripano missed a straight one from part-timer Kusal Mendis – it was Mendis’ first wicket in first-class cricket.

Overnight batsmen Tino Mawoyo and Hamilton Masakadza began the day with staunch defence, even with low bounce evident from the second ball of the morning. Mawoyo was uncertain against the short ball on the second evening, and Suranga Lakmal exploited that weakness by repeatedly employing the bouncer.

In the fifth over of the day, a bouncer hustled Mawoyo for pace and an attempted pull resulted in a top-edge, which was taken by square leg placed halfway to the boundary.

Sean Williams and Craig Ervine, Zimbabwe’s best batsmen, were visibly disconcerted by the bounce and chose to sweep Rangana Herath. Both batsmen struck boundaries but the stroke was always fraught with risk on this pitch. Williams attempted a hard sweep off Herath but the ball bounced extra and took the leading edge, which was snaffled at deep square leg.

Dilruwan Perera capped an excellent morning for Sri Lanka with two lbws, both non-turning offbreaks. Ervine missed a straight delivery, his pad interfering with the bat’s contact with the ball. Malcolm Waller went back to what he thought was a long-hop, but the ball skidded on and beat his pull.