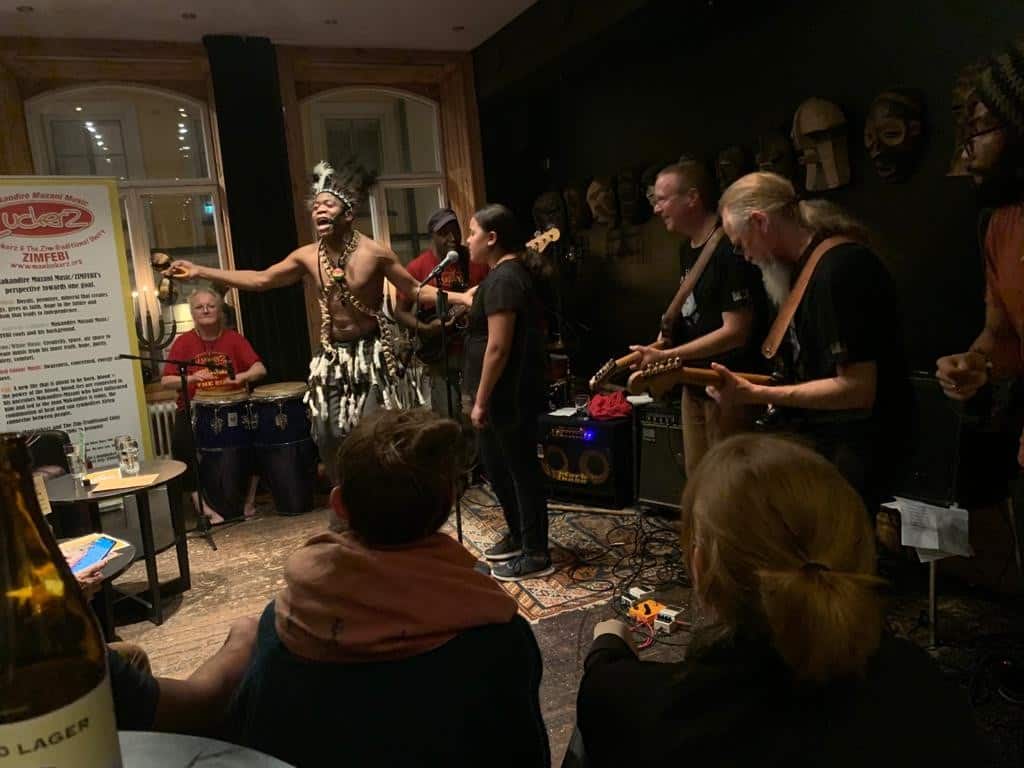 Share
Swedish domiciled singer Luckson Chikutu popularly known as Manluckerz left audience in awe over the weekend as he gave one of his best performances at Hellsten Hotel, Stockholm, Sweden.
By Problem Masau
Dressed in his trademark Zimbabwe traditional regalia, the musician showed all in sundry why he is among the country’s finest cultural exports in the past decades as the crowd was kept entertained with his nimble footedness.
Manluckerz showed why he is popular with merry-makers in this time of the year with hotels, corporates and individuals lining up to book him.
Together with his band the Zimbabwe Traditional Unity, the energetic singer captured the heart of the predominantly white crowd which was captured on camera mimicking some Shona lyrics.
To his credit, Manluckerz who is very fluent in English and Swedish has chosen to sing his songs in his native Shona language. The Shona folklore songs are proving to be popular in Sweden thanks to the singer who have chosen not to forsake his roots.
So dear is the African culture to the singer that he conducts dancing and cultural workshops on the continent’s tradition in Swedish schools.
“I had a memorable show on Saturday,” said the humble singer adding that “they loved music and imagine they were singing along some Shona songs. That was a moment every musician wants to have. I realized that we have a potential to create a billion-dollar music industry because our culture is reach.”
For more than twenty-years Manluckerz has been one of the most consistent artistes who have kept the Zimbabwean flag high despite the challenges the country is facing. Last year, he was given an award in Sweden for his role in promoting African culture in Europe. He was also nominated last year for the coveted National Arts Merit Awards for his role in promoting Zimbabwe’s tradition in the diaspora
Share FacebookTwitterGoogle+ReddItWhatsAppPinterestEmailViberLinkedin