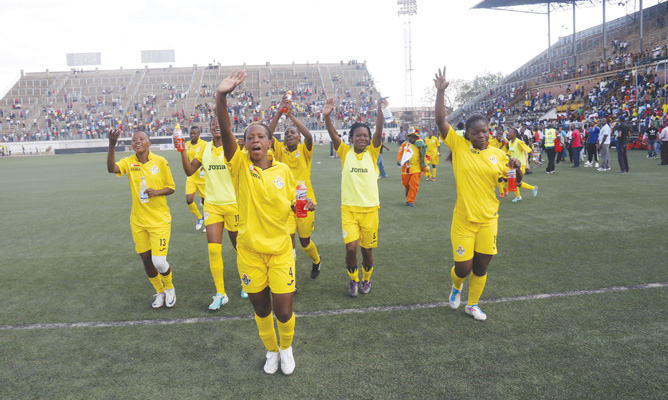 The moment the final whistle was blown at Rufaro stadium, gesturing Mighty Warriors’ victory over Cameron multitudes of people could not hold back their excitement as the team had secured a place for the 2016 summer Olympics to be hosted in Rio de Jainero, Brazil.

While many people were celebrating, Cecelia Gambe, who is Zimbabwe Women Football board member was in tears.

She clasped onto her teammates for support.

The sobs were stifled at forts when she attempted to hide her grief, but emotions were high that she could not hide the tears. All the defences washed away in the tears that rolled down her cheeks.

Approached by this reporter she even cried more and could not hold back the weeping. It was a heart rendering situation.

Two members of the technical team held her up and she lackadaisically joined the celebrations with tears still flowing down her cheeks.

Narrating the mighty warriors’ long walk to success, Gambe said it was not an easy ride, she had to helplessly watch as the girls were treated as second class citizens

“It was throbbing seeing the girls being treated as second class citizens in their own country. The journey was just tough for the team,” she said while trying to restore herself after a  few minutes of crying.

“Every time we have had to use our begging bowl so that we can go to matches. We knocked on almost every minister’s door, some of the ministers would say vanangu mananonoka ndakuda kuenda kupurazi (my children I now need to go to my farm, I cannot see you now)

“They would shut doors for us but now they are the same people who are at the forefront congratulating us and itching to join the mighty warriors ship as it set to cruise to,” she said citing the minister of sports as one of the individuals who would not open the doors for the girls.

Gambe said that the mighty warriors’ camp was often faced with food shortages forcing the technical team and the players to bring food from their homes.

“Many times we had to bring food from our own homes so as to feed the girls, I would like to thank the girl’s parents who also aided us with food as they could not help seeing their children feasting on (Matemba) Dried Kapenta every single day.

As if this was not enough, the team often faced accommodation problems as most of the members are not based in Harare.

“I remember one time we spent the night at the airport after failing to secure fuel for one of our colleague’s car.

“There was nowhere to go. Most of us are not based in Harare, some are based in Bulawayo. I’m based in Mutare,” said Gambe.

The team that won the Cosafa Women Championships just three years ago and toured Europe and South America struggled to get resources to get into camp as well as funds to travel to Ivory Coast.

“There was no single cent for us to go to Ivory Coast but Mr Mashingaidze (ZIFA CEO) managed to convince FIFA and we got a second.

“We played Zambia and no allowances were given to the girls. We are doing all this on voluntary basis,” she said.

Zimbabwe Football Association  (ZIFA) CEO, Jonathan Mashingaidze despised those who could not aid the mighty warriors when thy needed help.

“As Zimbabweans we should learn to rise together, let’s not wait for the baby to be delivered. Let’s be there at its birth,” he said.

He also said the dysfunctional women league is a major threat to the fitness of the girls.

‘League matches, are played haphazardly due to lack of funding and we call upon the fiscus and cooperates to intervene in women football.

‘The girls need to be fit for Brazil and without a proper league we will face a lot of challenges,” he said.

Team captain, Felistus Muzongondi called on the government to resuscitate women football in the country.