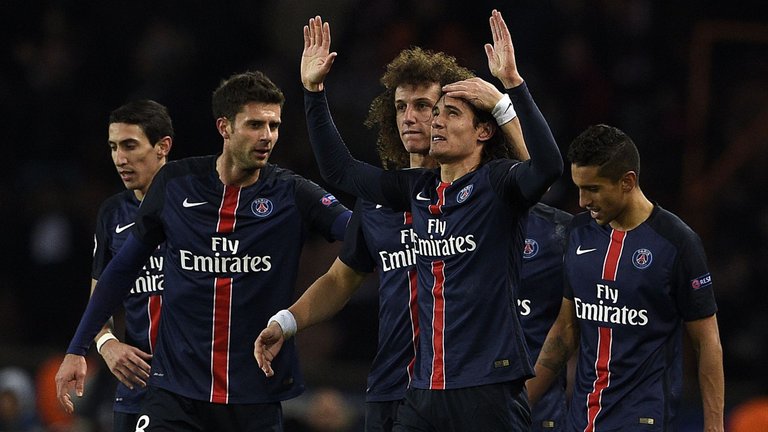 Paris Saint-Germain will take a narrow lead to Stamford Bridge after beating Chelsea 2-1 in the first leg of their Champions League last-16 tie at the Parc des Princes.

Substitute Edinson Cavani fired the winning goal in the 78th minute after Chelsea’s defence had withstood heavy pressure for much of the game on Tuesday night.Zlatan Ibrahimovic’s deflected free-kick had given PSG the lead in the first half, before Jon Obi Mikel equalised for Chelsea in stoppage time before the break.

But Cavani struck what could prove to be a crucial goal for Laurent Blanc’s side ahead of the second leg in three weeks.

PSG dominated the early stages, with Lucas Moura, Marco Verratti and Ibrahimovic all threatening Thibaut Courtois’ goal, but it was Chelsea who should have taken the lead midway through the first half.

Diego Costa found himself unmarked in the box when Baba Rahman’s cross was delivered from the left, and the striker forced a brilliant save from PSG goalkeeper Kevin Trapp, who got his hand to the ball to tip it onto the bar.

It was then Ibrahimovic’s chance to head his side into the lead, but the PSG striker made a mess of his effort from Angel Di Maria’s cross as he nodded it into the ground and over the bar.

After 39 minutes, Ibrahimovic did manage to break the deadlock, and it was Mikel – brought in by boss Guus Hiddink for the suspended Nemanja Matic – who was the guilty party for Chelsea.

The midfielder conceded a free-kick on the edge of his own area, then took his place on the edge of the wall before turning away from Ibrahimovic’s strike and allowing the ball to deflect off him and beat the wrong-footed Courtois.

Mikel, though, would redeem himself on the stroke of half-time, as he slammed home from close range after Costa had flicked Willian’s corner into his path. It was just his sixth goal in 348 games for the club.

Chelsea came out after the break with far greater impetus, and Trapp again had to deny Costa three minutes following the restart after the striker was played in behind the PSG defence by Willian.

But it was Courtois who was the far busier keeper as the second half went on. He saved smartly from Ibrahimovic at his near post, dived at the feet of Maxwell to keep him out then beat away Lucas’ shot from the edge of the area.

PSG refused to let up in their pursuit of a second, but they were up against a Chelsea wall that refused to break down.

Blaise Matuidi looked destined to score when the ball dropped to him eight yards from goal but, in almost John Terry-like fashion, Branislav Ivanovic threw himself at the shot to keep it away. Courtois was then called into action again to keep out Di Maria’s bending free-kick at full stretch.

With 13 minutes to go though, Chelsea’s resistance was finally breached. Cavani, who had replaced Lucas just a couple of minutes earlier, spun away from Ivanovic and Gary Cahill before getting onto the end of Di Maria’s ball over the top and finishing from a tight angle through the legs of the advancing Courtois.

Chelsea host Manchester City in the FA Cup and face Premier League matches against Southampton, Norwich and Stoke before the second leg against PSG on Wednesday, March 9.