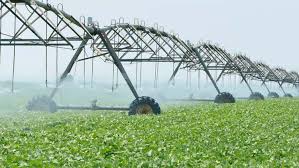 Cabinet yesterday approved a proposal by a local manufacturing company, Maka Resources to set up new irrigation infrastructure and rehabilitate existing ones under the Special Irrigation Development Program as the country seeks to shift from its over-reliance on rain-fed agriculture.

Speaking at a post-cabinet press briefing, Information, Publicity and Broadcasting Services Minister, Monica Mutsvangwa said under the program a total of 100 000 hectares of land will be put under irrigation nationwide.

“Cabinet considered and approved a proposal for the quick rehabilitation and development of irrigation infrastructure throughout the country. This was presented by the Minster of Lands, Agriculture, Water, Climate and Rural Development, Perence Shiri,”

“Under this proposal, Maka Resources, a local manufacturing company will partner government in the development of 100 000 hectors of irrigation in the next three years. The facility will cover both new and existing irrigation schemes,” said Mutsvangwa.

The development comes at a time Zimbabwe’s food security has been under threat to vagaries of consistent drought in recent years.

Owing to lack of adequate irrigation infrastructure, the country has had to endure net importation of grain despite the fact that Zimbabwe is well endowed with water bodies enough to sustain a robust irrigation-fed agricultural system.

Maka Resources will also supply inputs over the three year course of the program and will recover its investment from the beneficiaries.

However, there is skepticism over the manner Maka Resources ended up being the suppliers of equipment for this irrigation project considering the Industry Minister, Mangalsio Ndlovu’s sentiments that the offer from the company was unsolicited for.

‘It’s an unsolicited offer. So they made the offer to the government, a value proposition was made which we evaluated. Maka is pretty much the only company in Southern Africa, outside South Africa that is manufacturing center pivots, and others are importing center pivots to supply. They want to benefit our agriculture by providing a facility were they go to rehabilitate or put up an irrigation system and from that system they will recover their investment,”

“So we are also not talking about the government putting money there they will go to an irrigation scheme put up the infrastructure and in most cases they will be supporting them with the input and they said it might take up to three seasons to recover their investment,” Ndlovu told reporters.

Government has come under spotlight recently over shadowy deals with various companies such as  Zuva Petroleum in the special maize program where tender procedures are disregarded yet huge sums of tax payers’ money are paid for obscure services.