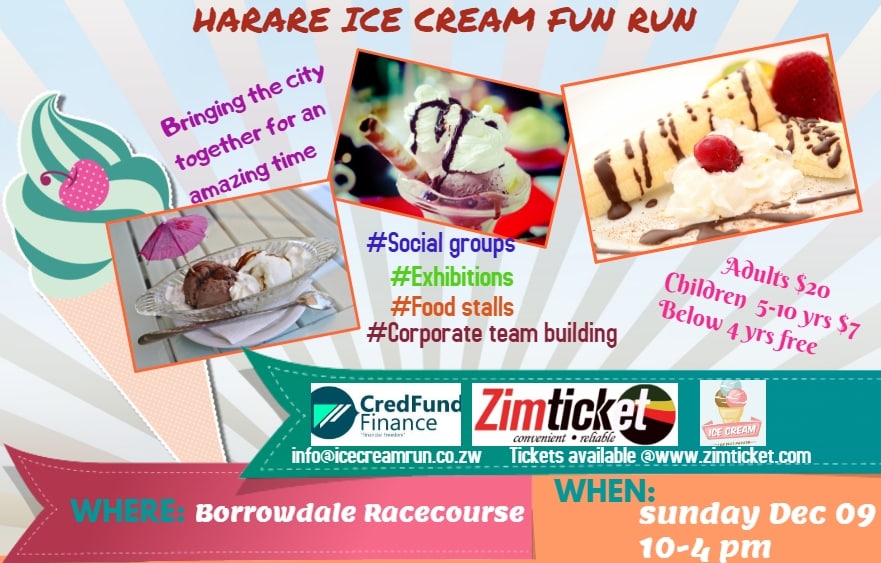 Fun loving Harareans were on Sunday left to count losses after paying for a Harare Ice Fun Run and Creamy After Party that turned out to be a scam as the organizers never showed up to the waiting crowds at the venue of the event.

The event which according to posters advertised on Facebook for close two months was set for Borrowdale Race Course saw unsuspecting people parting ways with their $20 in advance and $25 at the gate only to wait for an event that never came to pass.

Speaking to 263Chat, Faith Chamakanga who had also attended the event said after waiting for over two hours for the event to start they began asking for their money back to no avail.

An Alpha and Omega truck that was set to provide the ice cream could be seen at the venue but a close source to the happenings confirmed that nothing had been paid to the company.

“We were made to queue six times on different occasions but still did not get our money back saying the EcoCash phone and bag with cash had been stolen but they had both the phone and bag,

“I was not happy and drove to Highlands to open a docket, while we were there Justice Gumbochuma was already in custody. Zim tickets employees arrived and were let through to a private room because they had a presidential card but Solo from Zim tickets denied working for the President’s office,

“I was called back to withdraw the case as they were saying he was not a criminal and should not spend the night in the cell. I then said we cannot withdraw if we had not been refunded,

Posting in a Facebook group ‘Name and Shame Them Zimbabwe’ Dorothy Chiedza Ruramai said “The Harare ice-cream run was a disappointment, people paid $20 advance and $25 at the gate expecting to get their first ice-cream at 11:00am (as per the program they shared), three hours later there was nothing and no proper communiqué on the delay, several people left the event.

“We went to enquire a first time and were told in 15 min, which didn’t happen, we left after two and still they had not delivered. The organizers were nowhere in sight even when we requested to see them,” she wrote on the page.

The organizers have since vanished into thin air with their Facebook page deleted, leaving those who paid their money to attend stuck with nowhere to seek refunds.

A lot of people expressed disappointment commenting that they had brought their children and had paid in advance.

Speaking to 263Chat, one Tinashe Madamombe who was interested in the event before developing cold feet said she decided against going after noticing inconsistencies on the part of the organizers.

“Last time the color sprint, we paid $25 and did not get water or paint like what happened with the Spar Color Run, tinongovharwa mu Zim.

“I kept asking on their page what $20 or $7 for kids would cover and they kept ignoring that question. And also not mentioning which charities they were supporting was a red flag for me,” she said.

Unconfirmed reports have indicated that the organizers agreed to make a reimbursement of $12 down from the $20 people paid citing the 2% tax for all electronic payments, EcoCash and bank charges.

Efforts to get in touch with one of the EcoCash recipients Justice Gumbochuma were in vain as contact details availed to 263Chat were unreachable.

Biti Applies For Exception Of Charges

Investment or Infliction? The untold story of Redwing Mine