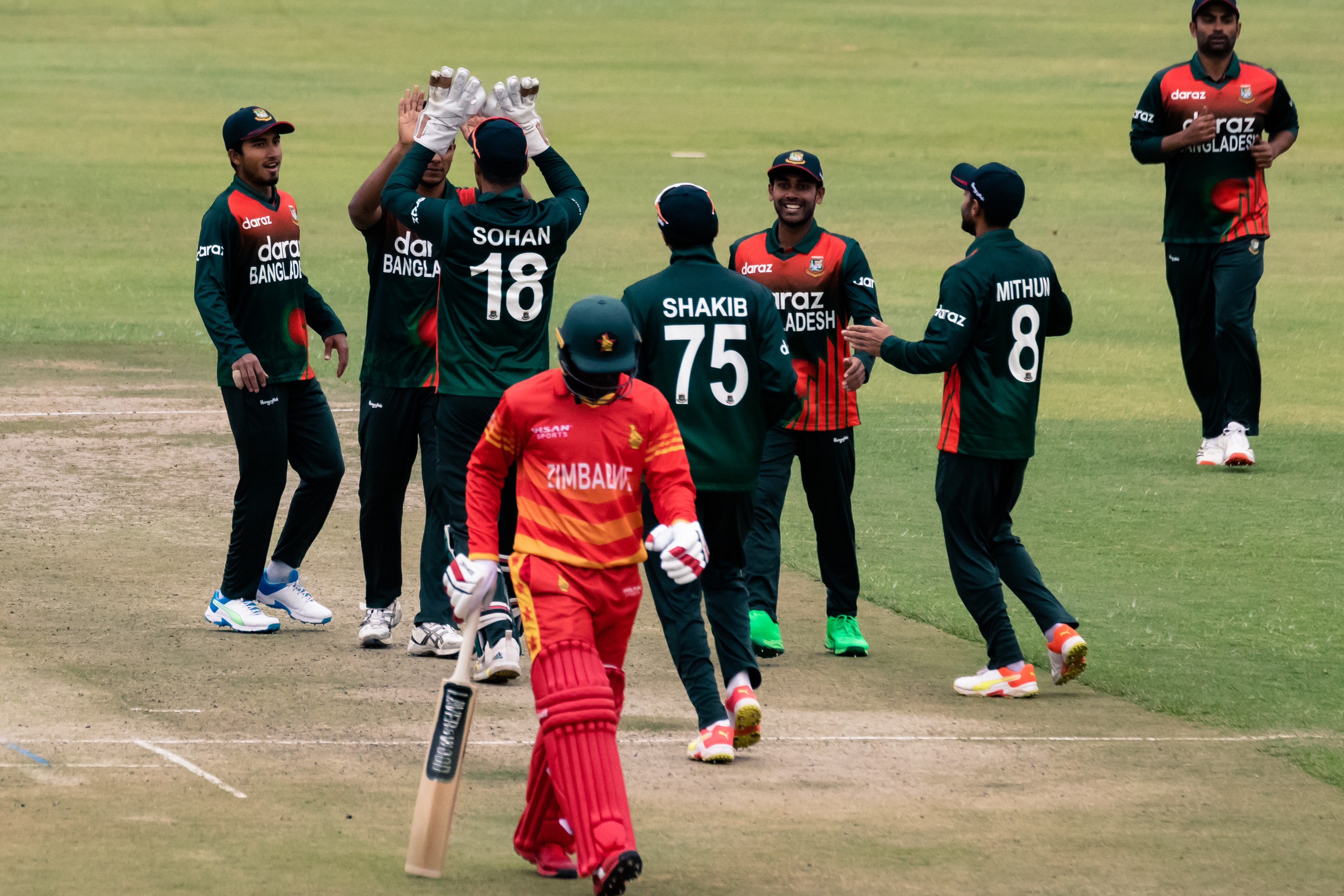 Regis Chakabva fought almost a lone battle as the Zimbabwe team as a whole were guilty of a poor batting display against Bangladesh at Harare Sports Club today, going down by 155 runs in the first one-day international (ODI).

While other players lost their wickets, chasing a target of 277, through ill-judged strokes or sheer inexperience, Chakabva scored a fine innings of 54, but he could not save his side from a heavy defeat.

Earlier he had enjoyed a very good day as wicketkeeper, taking four catches and running out one batsman.

Tendai Chatara and Ryan Burl returned to the team, while Dion Myers and Tadiwanashe Marumani made their ODI debuts.

Brendan Taylor – playing his 200th ODI – won the toss for Zimbabwe and put Bangladesh in to bat.

Blessing Muzarabani began with a superb maiden over to Tamim Iqbal, who was fit to play again for Bangladesh, while Chatara did the same to Liton Das.

Then Muzarabani struck, as Tamim, perhaps feeling under pressure, tried to cut a rising ball that was too close to him and edged a catch to Chakabva behind the stumps without a run on the board.

Shakib Al Hasan, however, responded by driving the first ball he faced for four to long-off.

The batsmen started to score runs as they settled in, with Shakib looking particularly dangerous, but when he had 19 he miscued a cut off Muzarabani and was easily caught by Burl in the covers; 32 for two in the ninth over.

Liton played a wise anchor role, staying safe until the pitch eased, but Mohammad Mithun played in a riskier style, scoring 19 off 19 balls before his luck ran out as Chatara picked up his first wicket, slashing loosely outside his off stump and edging another catch to Chakabva; 57 for three in the 14th over.

Drinks came after 15 overs, with the score 62 for three wickets, Liton on 16 and Mosaddek Hossain one.

After the break, Richard Ngarava bowled some superb overs of good pace, movement and lift, and reaped his reward when Mosaddek (5) played weakly at a ball moving away outside the off stump and Chakabva had his third catch; 74 for four in the 19th over.

The pressure relaxed a bit for Bangladesh as the pace bowlers had to be rested and the spinners Burl and Wessly Madhevere came on.

The partnership was a major nuisance for Zimbabwe, as it went on to add 93 to the score, before finally Luke Jongwe deceived Mahmudullah with a slower bouncer – he went for the hook, got a top edge and Chakabva leapt high to take another catch.

Mahmudullah had made an invaluable 33 off 52 balls, his only boundary being a six, and the score was now 167 for five in the 36th over.

Liton dominated that stand, having settled in well and opening up with excellent shot selection, and with Afif Hossain at the other end he reached his fourth ODI century, and third against Zimbabwe, off 110 balls.

Moments later he took another single to bring up the team 200 in the 41st over.

However, his innings closed for 102, as he miscued a pull off Ngarava and was caught near the midwicket boundary by the substitute fielder Wellington Masakadza, in for Timycen Maruma who had pulled his lower hamstring in the field earlier.

Afif and Mehidy Hasan Miraz now hit out at everything, hammering 58 runs in seven overs, until the 49th over, bowled by Jongwe.

Mehidy hit a two and a six before holing out for 26 in the deep off the third ball, and off the fourth Afif moved across his stumps to slog to leg, only to be bowled.

After a wide, Taskin Ahmed hit a single and was then very well run out by Chakabva in attempting a second, and the score had suddenly become 267 for nine wickets.

Mohammad Saifuddin, with the last man Shoriful Islam as his partner, managed to score eight runs, and with the help of a wide took the score to 276 for nine at the completion of 50 overs.

Jongwe’s final over earned him the figures of three wickets for 51 runs, while there were two wickets apiece for Muzarabani and Ngarava.

The four pace bowlers overall did a fine job, although they did bowl some expensive loose balls and there were 18 wides in the Bangladesh total.

Madhevere and Marumani opened the batting for Zimbabwe, against the bowling of Taskin and Saifuddin.

The inexperienced opening pair did not last long.

Marumani lasted only four deliveries without scoring, as Saifuddin brought a ball back from outside the off stump and, trying to cut, the batsman played it on to his stumps.

Then at 13 Taskin moved one of his deliveries in to Madhevere, who played across the line and was bowled through the gate between bat and pad for nine; 13 for two in the fifth over.

Taylor was joined by Myers, who soon cracked a handsome boundary through extra cover to score his first ODI runs.

Taylor was in fine form, hitting Shakib for two fours in an over with slog-sweeps.

Myers soon joined the party, and he hit two fours in the next over off Shoriful, taking the score now to 45 for two off nine overs.

Unfortunately, he tried to pull a ball from Shoriful from outside the off stump and was caught at deep midwicket for 18; 49 for three in the 11th over.

Chakabva too got after the bowling quickly, hitting Saifuddin for 11 runs off four balls, the first two going for four.

But the big hitting was too good to last, and Taylor had 24 when he fatally tried a slog-sweep against Shakib, got a top edge and was caught at short fine leg, to reduce Zimbabwe to 78 for four wickets in the 15th over.

Chakabva continued to attack, but Burl (6) became another victim of an ill-judged slog-sweep, caught on the boundary off Shakib again; 105 for five in the 21st over.

The suicidal batting continued, as Jongwe ran himself out without scoring, attempting an improbable single to midwicket; 105 for six.

With the injury to Maruma, the tail was exposed already, as Muzarabani came in to join Chakabva.

He was quickly lbw to Shakib for two, but Chatara stuck around rather longer.

Chakabva reached his fifty off 47 balls, with a remarkable slash over point for six, off the bowling of Shoriful.

However, he too fell to a leg-side slog and a midwicket boundary catch for 54, another wicket to Shakib; 119 for eight.

Chakabva scored 54 off 51 balls, the highest scorer of only three batsmen in the innings who reached double figures.

Shakib finished off the innings and the match as Ngarava (0) slashed at a ball outside his off stump and was caught at the wicket, Maruma being unable to bat.

Shakib had the excellent bowling figures of five wickets for 30 runs, with three other bowlers taking a wicket each.

Bangladesh deserved to win after fighting their way out of difficulties early on, and Zimbabwe should certainly have learned a lesson from this.