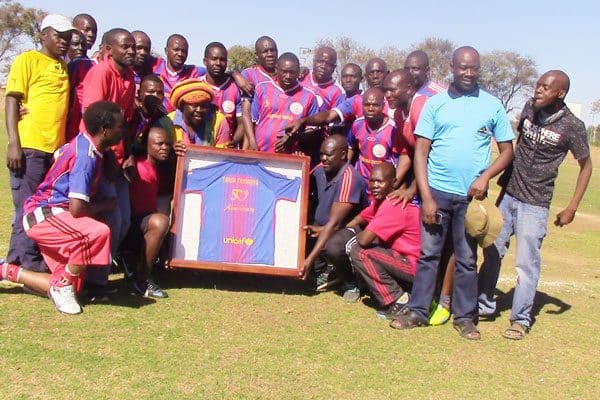 MUTARE– Eastern Region Division One side Masvingo United won the Zimbabwe Consolidation Diamond Company (ZCDC) Diamond Super Cup after getting the better of Tenax via a penalty lottery at Sakubva Stadium on Saturday.

The tournament, bankrolled to the tune of $200 000 by ZCDC, has become an annual event and has been running for three years now. The tourney,  features teams that finish in the top four in the Eastern Region Division One league.

For their outstanding performance, Masvingo United pocketed $80 000 while Tenax got $60 000. Losing semifinalists Buffaloes and Makaha pocketed $30 000 each.

Tenax, who were recently crown Eastern Region champions and snatching the sole ticket to play in the topflight league, the Castle Lager Premier Soccer League next year came into the match oozing with confidence.

On a day, the Zimbabwe Prisons owned team banked on home advantage, former premiership side Masvingo United had other ideas, banked on experience and twice came from behind to level scores in normal time before perfectly executing their five penalties to lift the diamond cup.

Tanex’s star player Takunda Mapara almost stole the show scoring a brace, twice converting from the spot in both halves for the home side while Admire Banda equalized for Masvingo in the first half.

With the match tied one all at half time, Tenax were awarded another penalty at the start of the second half and upstepped Mapara to coolly slot home his second goal of the day like the first one, from a penalty spot.

Masvingo United launched a wave of attacking before duly equalizing through enterprising forward Michael Tapera, voted as the promising player of the tournament, forcing the match into extra-time.

Tenax stuttered where it mattered most as they failed to convert their fourth penalty leaving Masvingo with destiny in their hands, emphatically converting the last spot kick to lift the trophy.

For Masvingo United coach, Godfrey “Mai Mahofa” Dondo, the win could have trigger the emotions of the turn of the millennium where he lifted five major cups, the Zifa Unity Cup twice in 2002 and 2005 and the Zimbabwe Independence Trophy in 2006 and 2007 as well as the Ok Woza Bhora Trophy in 2005.  2002 when he lifted the OK Woza Bhora trophy with the same team as the captain.

Dondo praised his boys for being brave, coming down from behind twice and subsequently lifting the trophy against a team that is already seeing itself as premiership material.

Dondo added that his boys have showed much character before warning other clubs in the league that next year they will be gunning for promotion.

“I am happy with the win my players showed character twice coming from behind away from home, we have a youthful team, we are going to build on the victory and try to gain promotion in the Premier League next year,

His counterpart Blessing Madombi said the match was a worth cup final, praising his opponents for their undying never say die spirit.

Madombi said his defence conceded silly goals that cost them on the day.

“The match had all ingredients of a cup final, it was a good game, we played well but we however conceded silly goals.

“We led them twice but hats off to Masvingo for playing well twice equalizing, but for now we will be focusing on our preparations for the next season,” he said.

Tenax missed on the chance to defend the cup which they won last year, the first edition of the Super Cup in 2017 was won by Surrey.