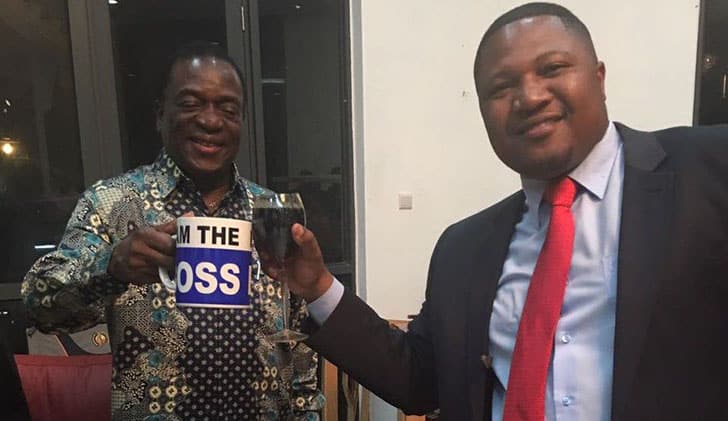 Deputy Minister of Information and controversial businessman, Energy Mutodi could be fighting a lone battle against Alpha Media Holdings owner, Trevor Ncube after his Zanu PF counterparts appeared infuriated by his ‘abuse of office’.

Ncube and Mutodi have been engaged in a harsh exchange of words on Twitter with the former threatening to stop government departments and parastatals from advertising in all AMH newspapers.

“If Trevor Ncube continues with his thoughtless rants against licensing authorities, government will be forced to instruct all its departments, parastatals and associated companies to stop adverts and subscribing AMH products. You are just Trevor Ncube not Clever Ncube,” he said.

Following Mutodi’s threats, copies of the Newsday were burnt down by alleged Zanu PF thugs and Ncube openly fingered Mutodi for the fracas.

With the altercation, dominating social media over the weekend, respected businessman and clergy, Pastor Shingi Munyeza,  Zanu PF legislator for Gokwe Nembudziya Justice Mayor Wadyajena have all jumped in defence of Ncube

Wadyajena accused Mutodi of abusing his office charging that the Goromonzi West  legislator must be careful as his behavior is tantamount to jumping into the jaws of the crocodile.

“Honourable Mutodi you are misusing your energy. This conduct borders on criminal abuse of office and may one day get you in serious trouble.

“I know for sure His Excellency Emmerson Mnangagwa disapproves this  crap. We did not fight for this. This careless tweet will destroy what Zimbabweans are building,” charged Wadyajena.

Mutodi, however, fired back accusing Wadyajena of lacking wisdom expressing disbelief that the Gokwe Nembudziya parliamentarian had chose to side with people who criticize President Mnangagwa for stealing 2018 July 30 harmonized  election.

“I understand your predicament. Surprised you stand in the corner with those saying your president is illegitimate, stole goats from Chamisa and are now increasing the price of their goats. Read a bit more, listen more, wisdom is not common, ” he said.

Munyeza weighed in defending the AMH chief, reminding Mutodi that his rants against the media was against President Mnangagwa’s new culture of governance which is driven on the open for business template.

“With all due respect honorable minister this is a thoughtless rant. This goes against President Mnangagwa’s campaign of “Open for Business”. No one needs this arrogance from civil servants like yourself. We need to be engaging and progressive in finding solutions to our crisis.

“Minister, this is not  a reality show, people’s lives are at stake. We plead you  with you to focus your energy on issues that better people’s lives.”