Zimbabwe skittle Afghanistan for 131 as first Test gets underway 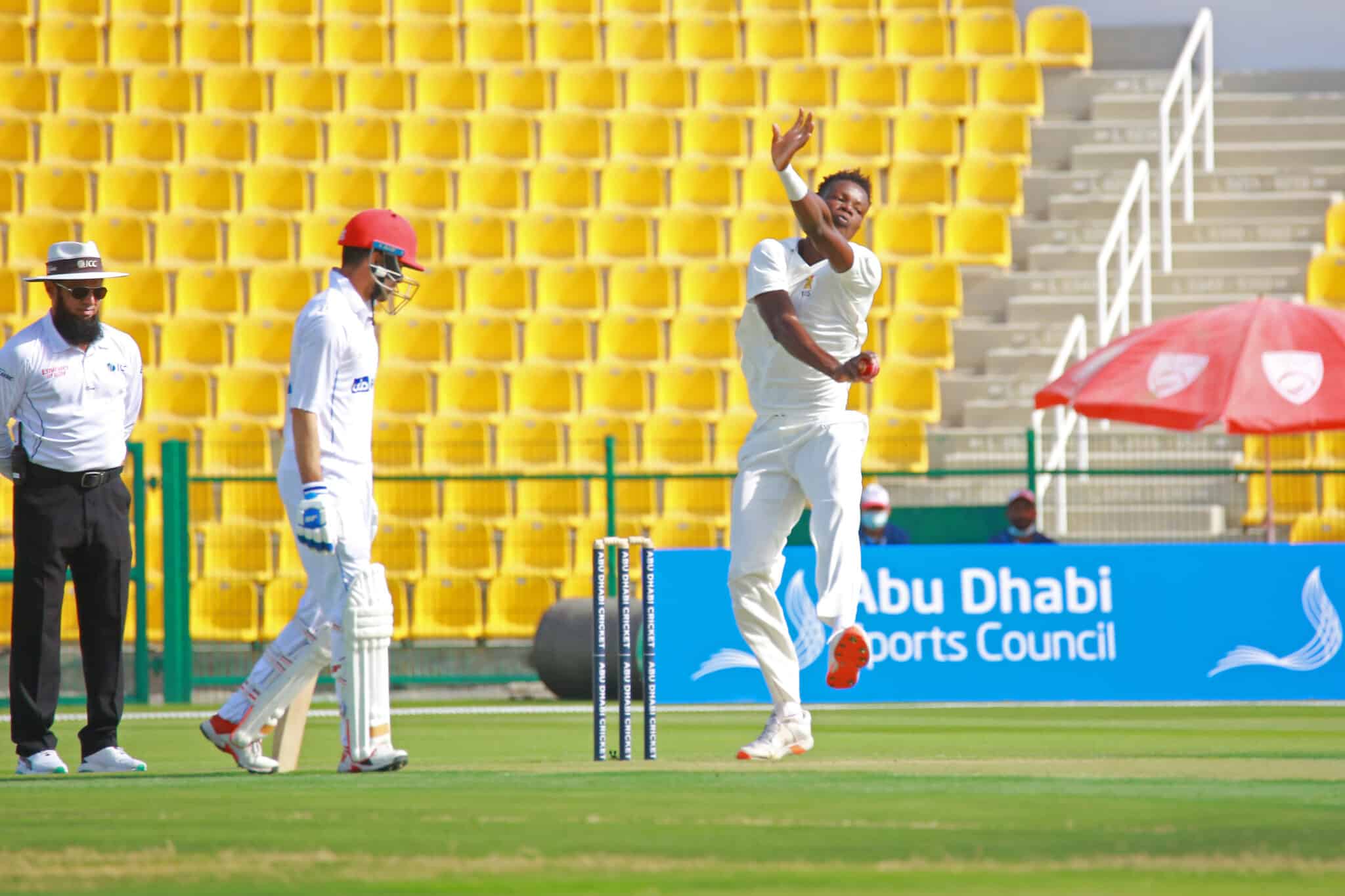 Blessing Muzarabani began the inaugural Test against Afghanistan with a new Zimbabwe record, while Sean Williams played a captain’s innings when his side needed him the most in Abu Dhabi on Tuesday.

Afghanistan won the toss, which is generally considered to be a considerable advantage in the United Arab Emirates, and naturally decided to bat.

There was a historic first for Zimbabwe, as they took a wicket with the first ball of a Test match.

Muzarabani bowled to one of Afghanistan’s three debutants, Abdul Malik, who played a rising ball moving in to him on to his stumps.

Rahmat Shah, Afghanistan’s most successful batsman, came in and drove his third ball for four to get their score underway.

However, he did not last long, as in Muzarabani’s next over he played defensively forward to a ball that moved away outside his off stump and edged it to the keeper, Regis Chakabva.

The Afghanistan score was now eight runs for two wickets.

The other opening batsman, Ibrahim Zadran, was in good form, however, and set to work to get his team out of trouble.

Victor Nyauchi joined the action for Zimbabwe in the 10th over, as Munir Ahmad (12) edged one of his deliveries low to second slip, where Sikandar Raza held a good low catch; 37 for three.

At 52, Nyauchi struck again to remove the dangerous Ibrahim (31), who sliced an attempted drive low into the gully for Tarisai Musakanda to pick up the catch.

Nyauchi struck again in his next over, producing a beautiful in-swinging yorker that uprooted two of the new batsman Hashmatullah Shahidi’s stumps to reduce Afghanistan to 69 for the loss of their top five batsmen.

This brought in the experienced captain, Asghar Afghan, batting low at number seven.

Afsar Zazai played a few aggressive strokes, as the new-ball bowlers were rested by Donald Tiripano and an over from Ryan Burl.

When lunch was taken the score had reached 85 for five wickets, with Zazai on 19 and Afghan nine.

After lunch Asghar played uncertainly several times at balls outside his off stump, and it eventually cost him his wicket, as he edged a ball from Muzarabani to the keeper for 13, leaving Afghanistan on 91 for six wickets.

Zazai was the best of the Afghan batsmen today, but Tiripano finally removed him for 37, with a lifting ball that he edged to the keeper, to make the score 109 for seven.

At 122, Abdul Wasi was out for a very dogged three runs off 42 balls, surprised by a ball from Sikandar Raza that bounced more than expected, and he popped up a catch to short leg.

The new man, Yamin Ahmadzai, tried to hit a tempting ball from Sean Williams over mid-on, but only holed out to Tiripano there for one.

Muzarabani now returned and in his first over he had the last man, Zahir Khan, caught at third slip without scoring, leaving Amir Hamza not out with 16.

Afghanistan were all out for 131 off 47 overs, a wonderful performance by Zimbabwe, both with the ball and in the field.

Muzarabani, who gave Zimbabwe the advantage right from the start, took four wickets for 48 runs, while Nyauchi supported him very well with three for 34.

Tiripano and the spinners Williams and Raza took a wicket each.

Burl, the first spinner to come on, had no luck with the wickets today, but he bowled seven good overs for only nine runs.

When Zimbabwe batted, Yamin Ahmadzai struck in the first over, producing a magnificent swinging yorker that Kevin Kasuza tried to hit through midwicket without getting his legs in place, and his stumps were shattered.

Prince Masvaure had scored a single and there were four leg-byes off Kasuza’s pads, while he himself failed to score.

Afghanistan only played one pace bowler, Ahmadzai, and opened at the other end with their left-arm spinner, Hamza.

Both bowled very well, and Musakanda was next to go for seven, bowled by a fine delivery from Hamza to make Zimbabwe 22 for two.

Williams was fortunate to get off the mark with an edged four off Hamza that he knew little about.

Then disaster loomed for Zimbabwe, as Masvaure was beaten and trapped lbw by an arm ball from Hamza for 15.

Wessly Madhevere, making his debut, came in and was given out lbw first ball, skidding in to the batsman – the umpire’s decision would have been worth a review, but unfortunately there is no DRS in operation at this match.

Zimbabwe were 38 for four wickets and in real trouble now as Afghanistan were gaining in confidence all the time.

Raza came in on a hat-trick, but he was not troubled by this and cut the ball through the close field for four.

The pair’s policy wisely was to play soundly, but to take every reasonable opportunity to score to keep the bowlers from getting on top.

Williams and Raza put together the first fifty partnership of the match, scoring at better than four runs an over and establishing a degree of mastery over the bowlers.

Afghanistan suffered a blow when Ahmadzai came back for a second spell, but had to limp off in the middle of an over with a leg injury.

Zimbabwe needed this pair to stay together until the close, but unfortunately Raza went for a slash off Hamza and was caught for 43.

Zimbabwe were now 109 for five as Ryan Burl came in to join Williams, who continued to bat well and reached a hard-earned fifty off 71 balls.

Just before the close of play Zimbabwe went into the lead with only five wickets down, with Williams on 54 and Burl eight.

It has been a fascinating day’s play for the neutrals, but nerve-racking for the partisans.