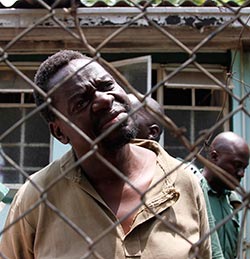 The rape convict, Gumbura had his application for discharge dismissed last month at the close of the State case after his application was turned down by a Harare magistrate.

Gumbura’s lawyer Professor Lovemore Madhuku pleaded with magistrate Francis Mapfumo that they be given a week to take the matter to the High court for a review .

However, Magistrate Mapfumo  denied the application saying that the defense should have filled an urgent chamber application for the stay of proceedings.

State Prosecutor Michael Reza had also opposed the application saying that the defense had a month to apply for a review but only to notify the court just before the defense trial begins.

The foiled jailbreak took place in 2015 in which Gumbura and his accomplices wanted to be discharged at the end of the state’s case.

Gumbura and his eight accomplices initially appeared in court on March 30, 2015 and only two, Vhumbunu and Matambanadzo were freed at the close of the state’s case sending Gumbura and others to defense case.

During trial, they took turns to make a cocktail of applications which contributed to delays in the progression of the case.

Sex For Ginimbi Is A Hobby, Says Wicknell