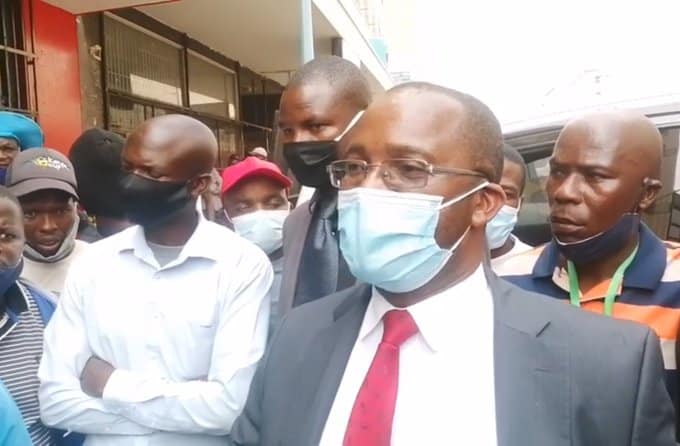 In a twist of events, the youths who claim to be part of the contentious MDC-T 2014 structures besieged party headquarters on Sunday night and locked themselves inside before appealing for unity from both camps.

Speaking to journalists after visiting Harvest house, Mwonzora said it was a matter of time before they reclaim the building.

“It is a question of time we are going to take our property back and we are taking it today. They are Mr, Chamisa people he arranged it we know that. These people were organised and funded by G40 to take over our building, they have taken it unlawfully and violently,” said Mwonzora.

Mwonzora claimed the MDC Alliance was in a weak position and that the latest takeover was different from their takeover of the building because this was illegally and violently conducted.

“We are not going to listen to any demands they are not in a position to make any demands they are in a weak position legally or physically. It is very different in the sense that we had a court order allowing us to occupy our building peacefully. There are people who have been held hostage and there are people inside who are from the MDC Alliance.”

The ‘2014 structures’ party youths said they would not vacate the building until leaders from both rivals address and listen to their demands. Anti-riot police had to disperse members from both camps when they had altercations at the party headquarters.

Meanwhile, riot police have since been deployed at Harvest House where they arrest over 10 people before they took control of the property which has been a source of conflict between the two feuding factions of the MDC-T party since the death of founding leader Morgan Tsvangirai.