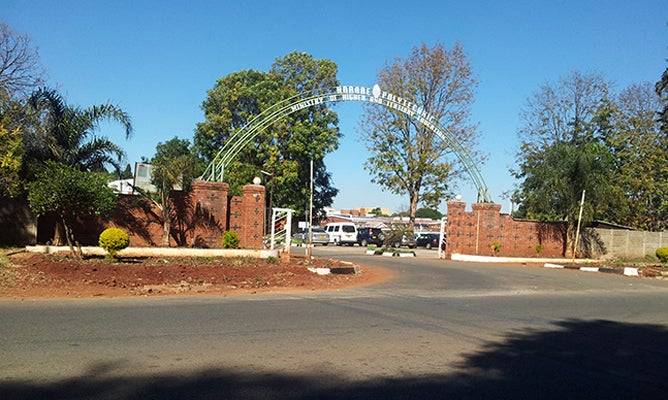 Learners at Harare Polytechnic College are stranded following an order by the school authorities to vacate their hostels to accommodate mourners from various parts of the country who are attending the late former President Robert Mugabe’s funeral, 263Chat can report.

The order was communicated to students’ yesterday afternoon giving them up to 6 am this morning to have vacated the learning institution.

As of Thursday morning when this publication visited the college, day scholars coming from their homes were being turned away at the school entrance as lessons have been officially postponed until Tuesday next week.

But for those using the school boarding facilities it was a melancholic sight.

Many could be seen seated outside the hostels, guarding their belongings in the blaring sun.

“I came here two days ago and now we are told to go back home but I come from Chiredzi and I don’t have the money to return as this was unexpected,” said one student who spoke on conditions of anonymity.

“The dean yesterday told us to leave this place by 6 am today. When we woke up we were being forced out of our dormitories and told to take with us all our belongings. They told us they are going to call the riot police if we remain stuck here but I don’t have anywhere to go,” she added.

Sources at the institution say the decision was taken at a ministerial level hence the school authorities cannot reverse the decision.

Students say school authorities have since yesterday promised to provide transport money for their return but up to this morning not a single student has received money.

“They have simply dumped us and exposed to us robbery and other stuff like that where should I go? I stay in Gwanda. They told us to go the bursary office and when we get there they tell us to leave the area. Not a single one of us has received a cent and if they had given us why would we be stuck here instead of going home,” said another student.

Efforts to contact the school principal were fruitless at time of publication.

Earlier this week an attempt to make use of University of Zimbabwe facilities to accommodate mourners mostly from rural parts of the country was unsuccessful as students resisted the move prompting the reversal of the decision.

The decision has been widely described as being inconsiderate of students ‘safety and right to education as mourners wishing to bid farewell to the late President should do so using their own resources without infringing on others rights.