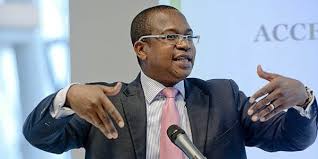 Since then, Ncube has been avoiding inquiries including from this publication to give an account of the actual figures yet he decided to clear the air at the Zimbabwe National Chamber of Commerce (ZNCC) 5th Annual Business Review Conference held yesterday in Harare.

“Up to last year, we have been using what we call in the accounting systems, the Government Financial Statistics-2014; it’s a global standard of accounting that has now evolved now it’s on GFS 2018. So what you would find is that the classification of certain resources has just changed, for example if we issue Treasury bills as government, previously you would classify that as an expense but now it’s below the line. If you look at the aid from donor partners , only the specific portion is classified for recognition in terms of budget and reporting and yet there is just so much else outside, although that is reported elsewhere, you still report it but reported elsewhere but not directly under Government Central Revenue,” the finance minister said.

He also said there are globally agreed rules for supporting countries such as the Paris rule which outlines that when donors give resources to countries they should use the respective country systems for accounting.

“We all signed out to that globally. So in my previous life I used to police that. So what has happened is that a lot of this support we have got as a country has not used country system, it has gone outside country systems,” he added.

However, despite the clarification, analysts fear the misunderstanding over the correct figure could have far-reaching negative implications on government’s credibility given past experiences of misappropriation of public funds within the institution in recent years.

Research has shown that corrupt governments have had to deal with donor flight across the region.

In 2018, the United Kingdom froze aid funding to Zambia, after its government admitted that US $4.3m (£3.3m) meant for poor families had gone missing.

RTG Revenue 62 Percent Up Despite Drop In Hotel Occupancy