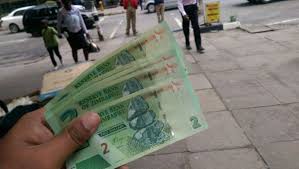 Finance and Economic Development Minister, Professor Mthuli Ncube has promised to issue higher denominations of the Zimbabwean Dollar during the course of the year to mitigate cash shortages in the economy.

Ncube who spoke to Bloomberg Television last night in Davos, Switzerland on the sidelines of the ongoing World Economic Forum said the new notes will come in denominations of ZWL$ 10, ZWL$ 20 and ZWL$ 50.

“We are doing two things. We are injecting cash into the economy and drip feeding the economy but we want to do it in a non-inflationary way were we are exchanging electronic currency for the physical cash, that’s the first thing. Secondly, we are introducing higher denomination notes, 10 dollars, 20 and 50 dollars during the course of 2020 that is what we are going to be doing, introducing higher denomination notes to make it easy for citizens to transact. So that is going to happen within the next few months,” he said.

Two months ago, the Reserve Bank of Zimbabwe (RBZ) issued new ZWL$ 2 coins and notes together with ZWL$ 5 notes to ease demand on cash in the economy but this has not yielded desired results with analysts calling for higher denominations.

Currently, Zimbabwe’s highest cash denomination is ZWL$ 5, which is equivalent to US$ 0.30.

Consequently, in order to avoid carrying huge sacks of coins the market has since resorted to transacting in the American Dollar which was decommissioned from transacting locally last year in July.

Already, smaller denominations of coins such as the 25 and 50 cents have been jettisoned from the market due to inflation.

It has not been a smooth transition for Zimbabwe’s currency reforms as authorities have had to juggle between restoring wage purchasing power that has been eroded by runaway inflation on one side while on the other keeping wages in check to avoiding wage-push-inflation.

This has created a great divide between government and labour which has seen a series of unyielding negotiations over public workers’ salaries which Mthuli believes both parties will soon find a breakthrough.

“What has happened is that through the currency reforms agenda there has been what we call the wage compression in economics. Wages are now catching up with the adjustment to the exchange rate because retailers are still pricing in US Dollar in their heads and translating that into domestic currency, so it has squashed the purchasing power of wages so we are closing that gap by allowing wages to rise,” the Finance Minister said.