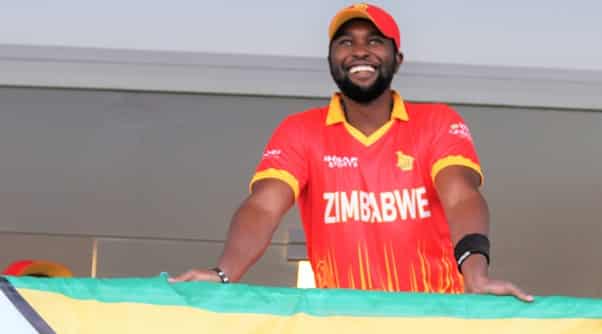 From Bulawayo, Zimbabwe where former captain – Elton Chigumbura played his first international match against Sri-Lanka in 2004 to Rawalpindi, Pakistan where he will feature in his last international series, it’s time for Zimbabwe to bid farewell to their hero who has represented the nation for 16 good years.

Elton Chigumbura is nicknamed ‘Mhizha’, a Zimbabwean Shona word which means – a capable workman, craftsman, artisan of the game announced his decision to walk away from international cricket last Saturday.

Elton was a revelation of the Zimbabwe Cricket development programme which was initiated at Chipembere Primary School in the Highfield in Harare.

Adding to that, Elton won a ZCU scholarship to Churchill High School, made his first-class debut at the age of 15 and represented Zimbabwe in two Under-19 World Cups.

Elton has featured in 283 international matches across formats (213 ODI’s, 14 Test and 56 T20Is), scoring more than 5,800 runs and taking 138 wickets. Elton started his career as a batting allrounder who later became a handy middle/lower order (big-hitting) batsman for Zimbabwe.

Elton Chigumbura captained Zimbabwe in 80 limited overs matches, winning 20 of them. Elton famously led Zimbabwe to ODI wins over Australia and New Zealand at home in 2014 and 2015 respectively.

In May 2015, he led Zimbabwe on a limited-overs tour of Pakistan that marked the return of international cricket in the country after a gap of six years.

On a personal note, he brought up his maiden ODI century on the tour. He later stepped down as Zimbabwe captain shortly after leading Zimbabwe to an 18-run win that helped them level the four-match T20I series against Bangladesh in Khulna.

Today Zimbabwe will be desperately looking for a consolation T20I win as they play their last game of the tour against Pakistan who are leading 2-0.

Customarily, Cricket greats usually receive a guard of honour as they exit international Cricket and Elton Chigumbura will most likely receive the same. After not participating in the three-match ODI series against Pakistan, Elton has played both T20I’s scoring 21 and 18 runs respectively. He is most likely and expected to play a pivotal role in today’s last game of the tour.

VUCA Environment Training On The Cards