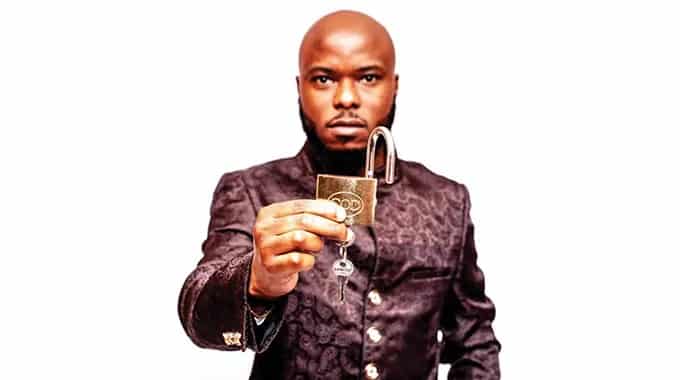 Following up on his controversial ‘spiritual padlock’, Bulawayo based preacher Mduduzi Dube, affectionately known as Black Elisha has sensationally introduced yet another medium in his ministry, the spiritual spear.

Black Elisha revealed that the spiritual spear has powers to bring in luck, lost love, money and also give spiritual powers to church leaders, business people as well as witchdoctors.

Just like the padlock, one has to own the spear after prayers with the controversial clergyman.

“The spear is spiritual, life is spiritual and the battles that people fight are not earthly but spiritual ones. We have had the padlock where we locked out misfortunes out of people’s lives and also unlocked breath through, now we have the spiritual spear. A spear is a fighting tool and we are fighting against everything bad that comes into people’s homes, businesses and also bestowing power.

“This spear has also been working to give power to businesspeople as well as spiritual leaders. The spear has been fighting people’s battles in the spiritual realm. Own the spear in your house and be protected. However, this doesn’t mean that we are abandoning the padlock, it’s still in play and very powerful,” he said.

The Spiritual Padlock initiative saw an influx of people flooding his Mpopoma house to seek divine intervention on their cheating spouses and partners.

Recently the leader of Christ Life Generation Church was in South Africa where he met his followers, businesspeople and celebrities.

Black Elisha first made headlines in 2014 when he helped a Bulawayo businesswoman identified as Nonceba Ncube deliver after nursing a 10-month pregnancy. She allegedly gave birth to a bullfrog after consulting Black Elisha.

Black Elisha later claimed his congregants got blessed with “miracle gold” during a church service.

Black Elisha claimed that using the spiritual padlock, he brought to life the shrunk manhood of an adulterous man he had allegedly “locked” at the instigation of his jealous wife.