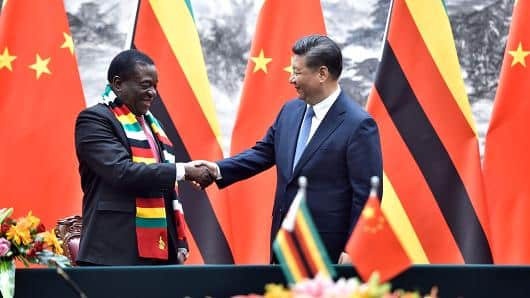 SADDLED by what are increasingly looking like unappeasable demands for the so-called reform and re-engagement by Western countries, could Zimbabwe make a volte face and re-look at China as a model of development and as an ally in recalibrated relations?

There is almost a sense of futility in Zimbabwe’s focus on the West while China waits patiently and perhaps seeing how its much vaunted friend run around in circles. China’s own path and story of development have been well documented. What makes the Chinese model significant for Zimbabwe is that it does not follow the traditional Western prescribed reform path. A path which is often characterized by unbridled interference in the internal affairs of sovereign states by Western countries.

The Zimbabwean government has committed itself to the reform agenda but the whole process has been dogged by a number of questions. Is the government doing enough? Are its efforts genuine? Is the West playing ball?

China’s model offers an alternative pathway. It’s a model that began under Deng Xiaoping’s leadership which was from 1978 to 1992 and successive leaders have built on it. It was designed by the Chinese for the Chinese context and Zimbabwe can learn from that.

Analyst Richard Mahomva recently noted that the uneven balance of power between the West or Global North and Africa was being used by the former to try to control the destiny of the latter.

“Today we speak of the Global-North and the Global-South divide which is sustained by an uneven interaction of world power.

“Here, the Global-North deposits the morals, standards and values to the Global-South in a bid to teach how economies should be managed.

“The Global-North is also a political moral prefect teaching the “Third-World” human-rights and democracy. China is a fast growing global power and yet her foreign policy is not significantly hegemonic as expected. China has maintained an ardent non-interference principle,” Mahomva recently wrote.

The West has constantly demanded a raft of reforms from Zimbabwe but has also oftentimes shifted the goalposts. The Zimbabwean administration under President Emmerson Mnangagwa has however,  said it will continue with both the reforms and re-engagement drive with the West.

Expectations were high as President Mnangagwa took over the leadership of the country and championed his reform mantra “Zimbabwe is open for business” which is an echo of the Chinese approach.

“Expanding and advancing opening up, and promoting reform and development through opening up, is a powerful instrument through which China can achieve continuing progress. Opening up brings progress, while isolation leads to backwardness.

“International development and China’s development both prove this to be true,” President Xi said.

But Zimbabwe’s progress has been slow. There have been many frustrations even among senior government officials.

Zimbabwe’s Ambassador to the Russian Federation Major-General Mike Sango (Rtd) recently said that more Russian companies were willing to invest in Zimbabwe, but had been frustrated by bureaucracy in some government ministries.

“A lot of Russian companies are willing to come and invest in Zimbabwe, but at times our bureaucracy discourages them from doing so.

“During the Joint Commission we had companies that showed interest in investing in the country and presented projects in the area of energy and mining, but they are still waiting for the responses from our government.

“This is the challenge we have. I briefed the President about this and I hope that he is going to help us address this situation,” Sango said.

At the same time there have been significant pluses such as the opening up of political space. The World Bank recently ranked Zimbabwe among the top 20 reformers in the world.

According to the World Bank Zimbabwe improved its ranking of ease of doing business by 15 places from 155 to 140 out of 190.

“We will not rest but we will keep reforming until the benefits of these measures are felt by all Zimbabweans,” President Mnangagwa said on Twitter.

Zimbabwe can still improve further as a number of key pieces of legislations that will lay the foundation for doing business reforms such as the Movable property Security Interest Act, the Insolvency Act and the Companies and Other Business Entities Act have been enacted and now need to be implemented.

But parliament has not done very well in fulfilling its legislative agenda.

At least six Bills that were before Parliament lapsed after the August House failed to debate and pass them during the First Session of the Ninth Parliament.

It is up to the Legislative Assembly to have the Bills restored at the stage at which they lapsed.

President Mnangagwa expressed concern when he delivered the State of the Nation Address early this month on the slow pace at which laws were being passed.

He urged Parliament to expedite the passage of Bills saying laws were a critical part of development.

“The law must be a universal instrument of development. As such, the slow pace in this august House, which has resulted in a low number of Bills passing through Parliament cannot be allowed to continue,” he said.

One of the challenges the government faces is implementing a free market at a time when the majority of the population is still vulnerable and in need of protection.

This is a challenge that China has also faced on its reform lane as acknowledged by President Xi.

“It does not mean that the market can replace the government’s functions, nor vice versa.

“Actually this is an effort to keep our economic reform targeted at existing problems. For more than two decades our socialist market economy has been developing, yet there are still quite a number of problems and drawbacks that inhibit the vitality of market entities and prevent the laws of the market and value from fully playing their roles,” he said.

China’s Communist Party’s collaboration with government officials is also key in the country’s reform agenda. This is something the Zanu (PF) as the governing party can learn from. The government needs backing from party officials to implement painful reforms.

“Party and government officials are essential for promoting reform. They should prioritise reform initiatives, pioneer reform efforts and take on the most painstaking and difficult reform tasks. Making sure reform is systematic, integrated and coordinated is an intrinsic requirement of reform as well as an important means for continued progress,” President Xi said.

Zimbabwe’s reform process is having its trials and tribulations and still needs a lot of work. But China has been there and it also wasn’t smooth sailing for them and neither was it always perfect but they made it still.

“Here is China, a country that was battling with reform and reconstruction a few decades ago just as we are doing currently; today the same China is the second-best economy of the world. It only makes empirical sense to strengthen bilateral ties with such a world power.

“As it stands, China provides very instrumental tenets for the socio-economic reform that our country needs — of which much of the development approaches being applied in China dovetail some of our own systems of structural renewal,” Mahomva pointed out.