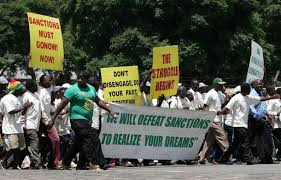 Hardly 72 hours after claiming that sanctions imposed on the country were hurting ordinary citizens, Glen View South Member of Parliament (MDC), Vincent Tsvangirai has made a U-turn saying he was misconstrued.

In a video currently trending on social media, Tsvangirai says he was misquoted.

“I just want to make the record straight. Take into consideration that I have been misconstrued and misquoted. As a country we have no monopoly on sovereignty, we have no right to interfere with the sovereign rights that other countries have to take stern measures against murderous regimes that violates the rights of their citizens such as the regime in Harare has done” said Tsvangirai

He said he believes the suffering of the people was as a result of the legitimacy crisis emanating from the 2018 elections.

“Once we deal with legitimacy by putting in place a truly people’s government that the people voted for everything will fall into place. Zanu PF is solely responsible for the despondent lives of the people. Zanu Pf is the biggest sanction against the people of Zimbabwe” he said

He added “The key fight that will restore the dignity of the people of Zimbabwe is the fight that restore a true people’s government that Zimbabwe voted for in 2018, it’s non but ourselves.”

The retraction comes after Tsvangirai stated during the Parliamentary Portfolio Committee on Foreign Affairs that sanctions were hurting ordinary citizens. This was in contradiction to the MDC stance which the party says sanctions are targeted at individuals and therefore should not be attributed to the country’s economic meltdown.

Coronavirus: More Needs To Be Done On Public Transport