Zimbabwe go down to Bangladesh in first T20I 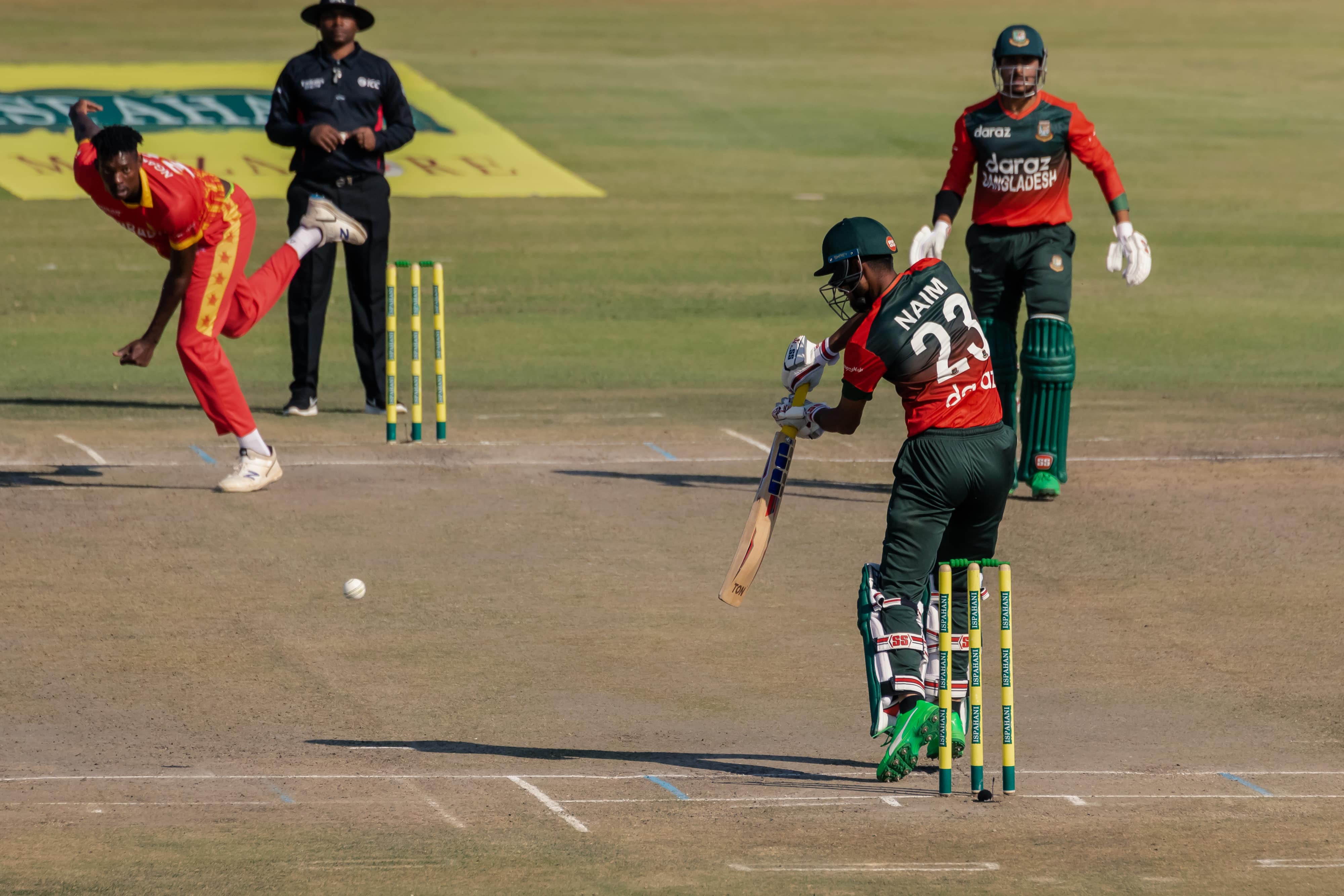 Zimbabwe failed to capitalise on their good start with the bat before they went down to Bangladesh by eight wickets in the first Twenty20 international (T20I) match at Harare Sports Club on Thursday.

Regis Chakabva, Dion Myers and Wessly Madhevere played dashing innings to take the home team to 91 for two after 10 overs but, unfortunately, from that point the batting slumped as they went on to fold for 152 with an over to go.

Zimbabwe, captained by Sikandar Raza, had won the toss and elected to bat first.

Madhevere and Tadiwanashe Marumani opened the batting against the bowling of Mohammad Saifuddin and Mustafizur Rahman.

In Mustafizur’s first over, Marumani played a superb pick-up shot from a length ball which went for six over midwicket.

Later in the over, though, Marumani (7) skyed a slower ball that was brilliantly caught by Soumya Sarkar racing in and diving forward to reach it; 10 for one.

Chakabva was in such brilliant form that he soon outstripped Madhevere, and hit two successive on-drives for six off Mahedi Hasan in the eighth over, which yielded 18 runs.

The pair put on 64 in just over six overs before Madhevere miscued a drive and gave a return catch to Shakib; 74 for two in the ninth over.

Myers was quickly underway, taking 10 runs in three balls from Mahmudullah, but lost Chakabva for 43, brilliantly run out by the wicket-keeper Nurul Hasan, having hit five fours and two sixes; 91 for three in the 11th over.

Raza failed to score, as in the same over he tried to cut a ball from Shoriful Islam too close to him and was caught at the wicket; 92 for four.

Tarisai Musakanda came and went for six, lbw to Sarkar in the 14th over, and later in the same over Myers was out for 35, bowled off stump as he aimed a shot across the line; 119 for six in the 15th over, and the Zimbabwe innings seemed to be declining badly.

Ryan Burl and Luke Jongwe briefly gave hope of a major partnership, and the latter made a good 18 before he shaped to scoop a yorker from Saifuddin over the keeper only to play the ball on to his stumps; 140 for seven in the 18th over.

Burl was the main remaining hope for Zimbabwe and he swung a powerful hit to long-on, only to be brilliantly caught by the running and diving substitute fielder Shamim Hossain for four; 143 for eight and still in the 18th over.

In the following over Richard Ngarava was bowled without scoring by a perfect yorker from Mustafizur, and Blessing Muzarabani was almost out first ball, edging a delivery, but Nurul sportingly signalled that he had not been able to complete a clean catch when he dived.

Muzarabani celebrated by hitting two fours, but then was bowled off the final delivery, so Zimbabwe were all out in 19 overs for 152, a disappointing total after such a good start.

Wellington Masakadza was not out with four.

Mustafizur took three wickets for 31, while there were two each for Saifuddin and Shoriful.

Bangladesh opened their innings with Mohammad Naim and Sarkar, against the bowling of Muzarabani and Madhevere, a mixture of pace and spin.

These bowlers made a good start, with only nine runs being scored off the first three overs.

However, Naim hit three fours off the next over, from Ngarava, and then Sarkar smashed Jongwe’s first ball for six.

After 10 overs the score was 76 without loss, half the Zimbabwe total, but with all 10 wickets still in hand.

Soumya reached his fifty off 45 balls with a clip to deep midwicket, moments before his innings ended.

Going for a second run, he was narrowly run out by fine work from Chakabva, who flicked a quick return from Masakadza on to the stumps.

Mahmudullah hammered his first ball straight for four, but then there was nearly another run-out, as Naim also sought a second run to reach his fifty, but a wide throw allowed him to survive.

In the following over he successfully reached his fifty off 40 balls.

It was Mahmudullah who was run out in the following over, though, as the batsmen went for a quick single to short fine leg, and Muzarabani’s accurate return hit the stumps directly.

Bangladesh had now lost a bit of momentum, and they needed another 27 to win off the last three overs.

Any hopes Zimbabwe had of pulling off a surprise, though, disappeared when Ngarava bowled a poor over while a couple of misfields gave away runs.

Then Muzarabani, who had earlier been the most reliable bowler, taking the penultimate over, bowled a full toss that Nurul clipped over fine leg for six.

Off the fifth delivery Naim lofted the ball over mid-off for four to win the match for Bangladesh by eight wickets with seven deliveries to spare.

Naim finished with 63 not out off 51 balls, including six fours, and Nurul with 16 not out.

The only bowlers able to exert any control over the batsmen were Muzarabani, with 3.5 overs for 19 runs, and Masakadza, whose three overs cost 20 runs.

Zimbabwe and Bangladesh will meet in the second T20I on Friday.