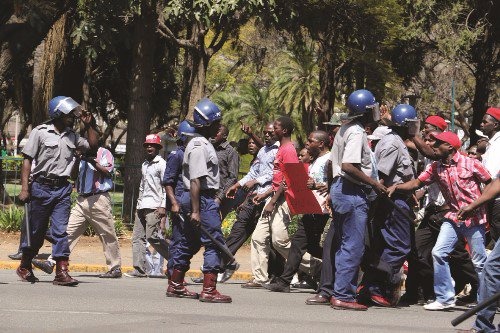 A local peace advocacy group, Zimbabwe Peace Project (ZPP) has reported that intimidation cases were high in the run-up to the July 30 harmonized elections with the ruling Zanu PF singled out as the lead perpetrator responsible for 83 percent of reported cases.

In a statement released last week, ZPP reported that intimidation was high in June and July as the elections drew closer.

“Intimidation was high during the month of June. To date, there is a decrease of 2% in intimidation cases from 68% of all cases reported in June to 66% in July. These figures remain high considering that there have been measures to curb election related intimidation and harassment,

“Among others, some of the notable cases of intimidation are the abduction of Peter Machoba in Chimanimani by a war veteran who has been arrested. In Manicaland, Nyasha Marange, the son of the chief, threatened villagers with violence similar to what was experienced in 2008. Voters are also being warned to avoid a runoff situation if they do not want a repeat of the 2008 violence,” ZPP said.

According to ZPP, Hurungwe West villagers took up these intimidation cases to the police for the perpetrators to be brought to book.

In some communities in Gokwe South and Guruve for example there were complaints about traditional leaders taking up roles as polling agents in the elections which in itself was an intimidating tactic and which robbed villagers in affected areas the right to vote freely.

Mnangagwa Says in Communication with Chamisa