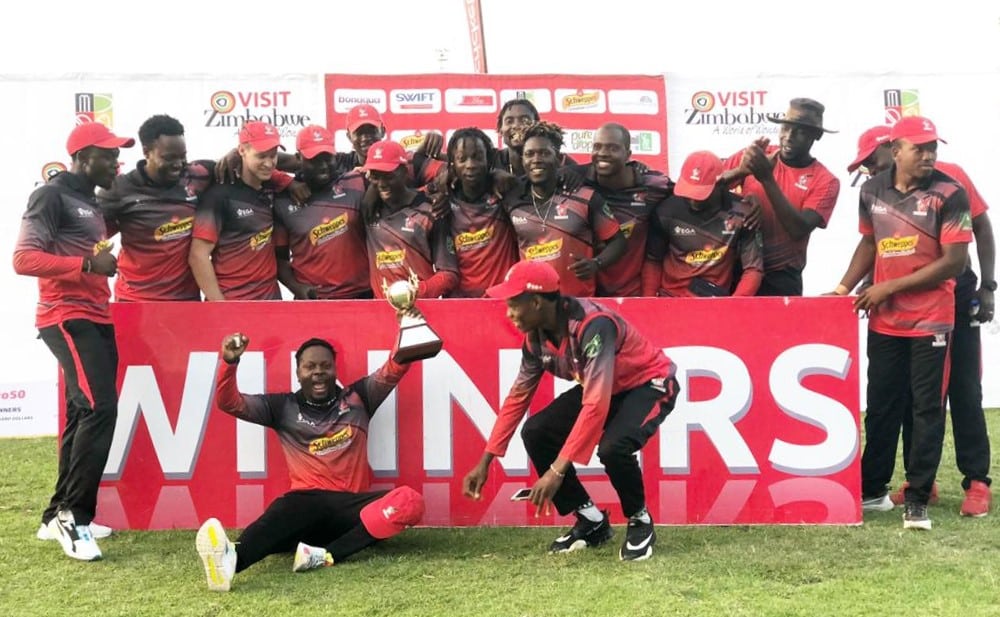 A magnificent century from Rhinos opening batsman Tafadzwa Kaitano was the great factor in their first trophy victory in their history, as they beat Southern Rocks by 47 runs in the Pro50 Championship final at Takashinga Sports Club today.

Rocks won the toss and put Rhinos in to bat on a warm sunny day.

Rhinos soon lost Bright Matsiwe, caught at the wicket off Nkosilathi Nungu for eight in the second over, but then Kaitano and Charles Kunje laid a fine foundation for the rest of the innings with a second-wicket partnership of 99.

Kunje scored a solid 47 before he was bowled by Dylan Hondo at 108, but then two more wickets fell quickly, Remembrance Nyathi being run out for six and Nyasha Mayavo first ball, making the score 117 for four in the 29th over.

The innings was now at the crossroads, but it went in the right direction, as Johnathan Campbell with 32 and Tashinga Musekiwa with 34 in turn shared vital partnerships with Kaitano, who went from strength to strength.

Kaitano sailed past his century and was finally out for 122 after 46 overs, lbw to Nungu, making a final effort in the dying overs to score as many runs as possible.

He batted over three hours to face 119 balls and hit 11 fours and two sixes, a wonderful effort for his team.

His dismissal only brought in Carl Mumba, in outstanding batting form recently, and the fast bowler did not disappoint.

He plundered 28 not out off 14 balls, with three sixes and a four, to take the total to 297 for eight wickets after 50 overs.

Nungu was the most successful bowler with three wickets, but he paid the heavy price of 80 runs for them.

To reach a total of almost 300 was a fine effort by Rhinos, all the more valuable in the knowledge that there was no Cephas Zhuwao who has the power to turn a match in a few overs.

Tafadzwa Tsiga opened the innings with Brian Mudzinganyama, himself a dangerous attacking batsman.

Tsiga was bowled by Kudakwashe Macheka for 11 with the score on 39, and then Tadiwanashe Marumani joined Mudzinganyama and they set about increasing the scoring rate.

At 89 Mudzinganyama was bowled by Kunje after scoring 53 off 65 balls, and then at 118, after 23 overs, Marumani was caught off Brandon Mavuta.

This put a lot of pressure on the remaining batsmen with the top three gone, but William Mashinge and Larvet Masunda rose to the challenge well.

They put on 50 runs together for the fourth wicket in just over 12 overs before Masunda was given out caught at the wicket off Musekiwa for 23.

Nungu then went for a big hit off Mavuta and skyed a catch to mid-on without scoring, and Rocks were in some trouble at 170 for five in the 36th over.

This brought in Richmond Mutumbami, unusually low at No 7, and he immediately set about attacking the bowling, with the required run rate now more than nine an over.

It was becoming desperate for Rocks now, and Mutumbami’s gallant effort came to an end for 22 off 17 balls.

At 199 for six in the 40th over, 10 an over were needed and there was not the batting left to do it, unless Mashinge could play the innings of his life.

Mashinge did indeed play a fine innings, scoring 51 off 71 balls before he was eighth out at 211, caught off Musekiwa.

Rocks refused to crumble, and Mutsamba and Hondo both fought hard, but Hondo was finally caught off Mpofu for 19, and the same bowler finally ended the match and the tournament by holding a return catch from Mutsamba, who made 17.

Mavuta was again the pick of the bowlers for Rhinos, taking three wickets for 40 runs in his 10 overs, while there were two each for Mpofu and Musekiwa.

At last Rhinos have broken their duck and won a trophy, deservedly, and surely none will begrudge them their joy, especially after their disappointments earlier in the season.