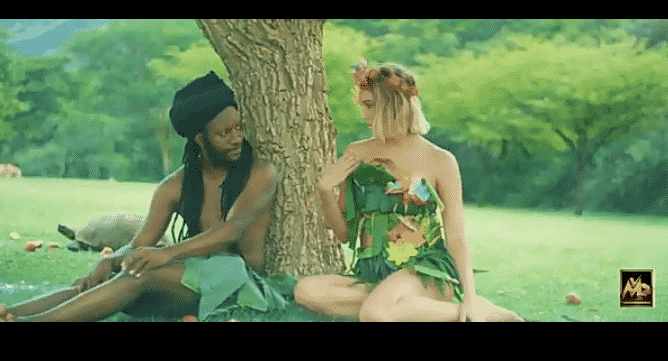 The song has been rocking the air waves across the region, capturing the attention of music lovers not only in Zimbabwe but beyond our borders.

MuGarden music video’s creative concept which captures the biblical Adam and Eve in the Garden of Eden, ends with Adam depicted by Wink D, not eating the forbidden fruit.

The love song is tonic for a relationship everybody desires that weathers all obstacles, challenges and criticism emanating from friends and family.

Winky D shows his lyrical prowess that will leave any individual developing feelings for being a hopeless romantic no matter what the circumstances.

Griffins’ also adds a peculiar spice in the song, her prolific “imajeni” jingle, her gothic persona with the snake, the unique natural flares, are the ingredients that make the song so captivating.

Jonathan Banda Winky D’s manger said, “We appreciate the overwhelming local and international support we have been receiving to reach this milestone of two million views.

“MuGarden hit the  Buzz TV show on fourth position, and its an  honour that we are meeting international standards, he said.