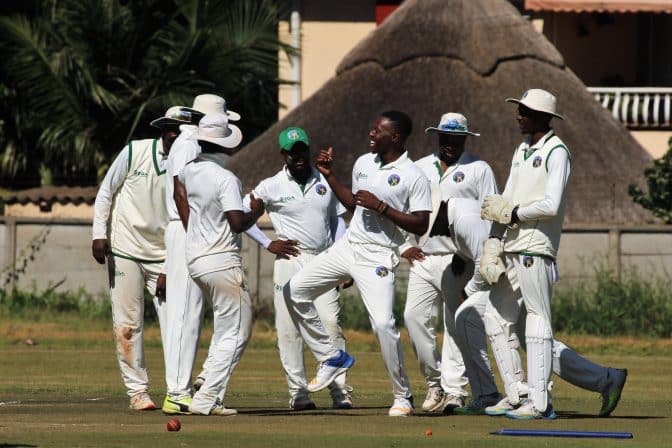 Vital wickets by Donald Tiripano and Roy Kaia of Mountaineers did most to turn what looked like being a close match against Eagles at Harare Sports Club today in favour of their team.

Tiripano removed three top-order Eagles batsmen and Kaia four from the middle order as their batting fell away, despite a good innings of 68 from Tinashe Kamunhukamwe, and Mountaineers won again, by 58 runs (Duckworth-Lewis method).

As in the first match played at the same venue yesterday, Mountaineers won the toss and decided to bat.

Eagles kept things tight in the field at the start, with Richard Ngarava and Trevor Garwe bowling well to Kevin Kasuza and Joylord Gumbie, and only three runs, including a wide, came off the first four overs.

Then Gumbie broke free with a cracking square drive for four off Ngarava.

Thereafter Kasuza played the leading part in another fine opening partnership for Mountaineers, putting on 68 in 20 overs before Kasuza drove a catch to long-off off Tapiwa Mufudza after scoring 39.

Gumbie scored 26 before he ill-advisedly tried a reverse sweep and was easily caught off Mufudza at backward point; 88 for one in the 27th over.

Richmond Mutumbami came in, and soon got hold of Tino Mutombodzi’s bowling, hammering him for a six, three fours and a single in an over.

The score was rattled along while when Kaia was caught on the midwicket boundary off the bowling of Mutombodzi for 40, with the score at 146 for three in the 37th over.

Drinks were taken, and the interval struck twice for Eagles as two balls later Mutumbami (31) miscued a stroke and sent Mutombodzi a simple return catch.

Shingi Masakadza and Kudzai Sauramba now took over the batting, with Masakadza in particular getting his eye in quickly and driving Faraz Akram for two successive sixes.

They put on 58 runs together in six overs before Sauramba (20) edged a ball from Ngarava to the keeper; 205 for five.

Gary Chirimuuta soon followed without scoring, trying to drive Ngarava but skying a catch to long-on.

At 209 Mashinge (2) edged Garwe to the keeper, and with five overs to go and seven wickets down Eagles were fighting back and Mountaineers faltering somewhat at the death.

Then Shingi Masakadza, after hitting another four, tried to swing a ball from Ngarava to leg and was bowled behind his legs for 34; 214 for eight.

Tiripano, trying to push the score along, perhaps tried to hit out too soon, as he skyed a catch off Garwe at 215 for nine, after 46.2 overs; three wickets had fallen in nine balls.

As the last man, Victor Nyauchi, was walking out a sudden shower came on, forcing the players to run off the field and take an early lunch.

The shower was comparatively brief and, with lunch taken, the time lost was so small that Mountaineers were able to continue their innings, with only one over lost.

Wellington Masakadza and Nyauchi went for their strokes with good sense, and took the score to 234 before, with two balls remaining, Nyauchi was run out for nine, leaving Masakadza not out with 11.

All the top six had scored 20 or more, but the highest was only 40, by Kaia: the last five batsmen scored only 22 runs between them.

Ngarava took three wickets for 52, and there were two each for Garwe, Mufudza and Mutombodzi.

The slight adjustment in the overs meant that the Eagles target was 234.

Eagles opened their batting with Kamunhukamwe and Chamu Chibhabha against the bowling of Wellington Masakadza and Nyauchi.

They scored 30 within five overs before Chibhabha, driving Tiripano, got a leading edge and was caught at mid-off for nine.

Kamunhukamwe was showing some of his best one-day form, but lost Kudzai Maunze (8) at 46, bowled by Tiripano in the ninth over.

Then Mountaineers struck a major blow when Regis Chakabva lobbed a catch to backward point without scoring, making the score 55 for three.

With Elton Chigumbura in, Kamunhukamwe reached his fifty off only 37 balls, and Eagles steadily started putting themselves into the better position.

Chigumbura began to look better the longer he stayed, although rarely trying to indulge in his famous big hits of his great years.

Kamunhukamwe slowed down, or perhaps the bowlers bowled rather better to him, after reaching his fifty, and eventually he was out caught at the wicket down the leg side trying to turn a ball from Kaia to leg for 68, scored off 76 balls with eight fours.

The score was 126 for four in the 27th over, and Eagles were still in with a fair chance for victory as long as they did not lose too many wickets.

Soon after Mutombodzi arrived at the crease Chigumbura hit Kaia for a big six over long-on.

Great was the Mountaineers celebration, though, when in Kaia’s next over Chigumbura tried to repeat the shot over midwicket, only to be well caught by Kasuza, fielding wisely well away from his infamous short-leg position.

Chigumbura’s 35 came off 65 balls, with two sixes and one four, and his dismissal left Eagles on 139 for five after 31 overs.

It would only take one more wicket for Mountaineers to be right back in the game, and this duly happened: Tony Munyonga (2) unwisely swept and missed at the first ball of Kaia’s next over, and was trapped lbw, to make Eagles 142 for six.

Mutombodzi and Akram now had to try to steady the ship, bt the latter did not last long, another victim of the wiles of Kaia as he skyed a catch to long-on for two; 146 for seven in the 35th over, and Mountaineers well on top now.

Mutombodzi and the experienced Garwe fought it out, but the required run rate was now over six an over and climbing.

With his score on 16, Mutombodzi was struck by cramp, and after a long delay had to retire hurt, as the light worsened.

Garwe faced 29 balls for 14 runs, an unaffordable luxury when 10 runs an over were now needed, before holing out in the deep off Tiripano; 175 for eight in the 44th over.

Two balls later Mufudza was run out for five and, with Mutombodzi unable to resume, the innings was over for 175.

Tiripano finished with four wickets for 29 and Kaia four for 30.

Having started their season with two defeats, Eagles are in serious danger now of losing their Pro50 Championship crown and will have to turn their team around and play some remarkable cricket to retain it.

US$5,2 Million Budget Towards Coronavirus Awareness and Prevention