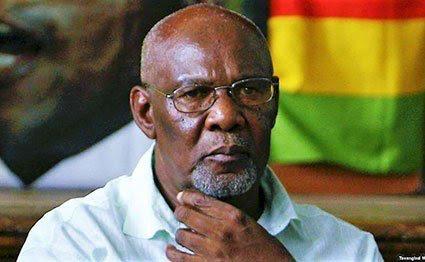 The Zimbabwe National Liberation War Veterans Association (ZNLWVA) has expressed sympathy in the manner in which the late ZIPRA Commander and intelligence supremo, Dumiso Dabengwa was treated during the Gukurahundi period describing it as a mistake.

The late liberation war icon together with fellow ZIPRA Commander Lookout Masuku were incarcerated in 1983 at the height of Gukurahundi massacres  for  four years on alleged treason.

Upon his release, Dabengwa went on to become the Home Affairs Minister in President Robert Mugabe’s administration before opting out of the government in 2008.

Speaking at a Press conference today, spokesperson of the war veterans’ representative body, Douglas Mahiya said they sympathize with the manner Dabengwa was treated by the government post-Independence given the selfless contribution he made to the liberation cause.

“We do sympathize, you cannot have a process were no mistakes are made. Whatever is perfect today is out of a lot of mistakes in the process, so whatever mistake was done is not what we should always highlight and forgetting the goods things that would have been done. So we are talking about Dabengwa’s personal life commitment and result which is political independence for the people of Zimbabwe,”

He went on to suggest that Dr Dabengwa’s cunningness from his rich military intelligence background played a crucial role to the events of November 2017, when former President Robert Mugabe met his waterloo also pointing to the fact that he remained their commander whom they derived advice from.

“He was a principled leader. Let me tell you that I was a participant that brought about the new dispensation, but let me tell you that Dabengwa was part of it because he used to call us. We used to consult with him and he would tell us how to do it, when to do it, the timing and the precautions necessary so when we did it we did it with Dabengwa’s input,” Mahiya added.

Dr Dabengwa passed away yesterday, aged 79, in Nairobi, Kenya on transit back home where he was coming from India seeking treatment for a liver ailment.