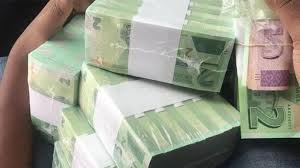 Financial services firm, Ecobank who are wrapped in controversy on allegations that they disbursed ZWL$ 15 000 worth of two dollar notes to a single client have been cleared of any wrong doing by the Reserve Bank of Zimbabwe ’s Financial Intelligence Unit, 263Chat Business can reveal.

Investigations by the FIU over circumstances leading to the disbursement of the cash in question revealed that the bank complied with the regulatory processes in disbursing the ZW$15, 000 worth of notes to a client who intended to procure milk from small scale producers it emerged.

“Following the publication of a press release by Reserve Bank of Zimbabwe on pictures of notes circulating on social media, Ecobank Zimbabwe Limited wishes to advise that the Financial Intelligence Unit (FIU) conducted investigations into alleged diversion of cash to the parallel market,” the bank said in a statement.

“The investigations by the FIU have shown that Ecobank complied with the regulatory processes in disbursing the ZW$15, 000 cash in question. This amount was intended for purposes of procuring milk from small-scale producers by a client of the Bank,” the bank went further.

263Chat Business however understands that investigations are now centered on the client to ascertain if the funds were indeed used for their intended purposes and to ascertain whether there exists a criminal activity on the part of the client.

The wads of two dollar notes sparked uproar on social media during the past week together with bucketful of coins that had been displayed by a gaming punter who have just hit jackpot.

The development comes at a time most citizens are stranded at banking halls as cash continues to be in short supply despite new notes and coins having been injected into the market.

But market watchers have implored on authorities to stop issuance of massive quantities of cash no matter the purpose and encourage small scale producers of commodities such as milk to accept electronic payments.