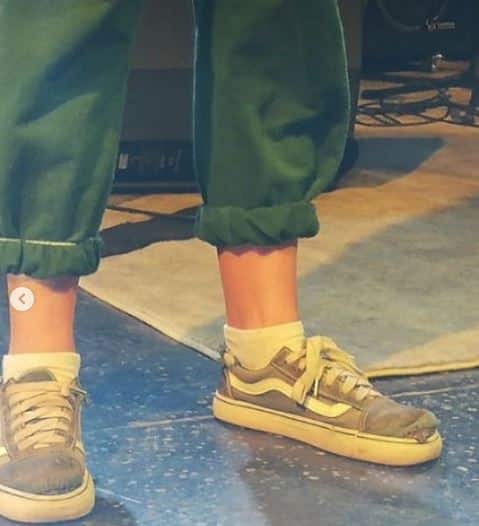 After making waves on social media over her dirty Vans tennis a few months ago, blossoming musician Gemma Griffiths has struck again with another set of shoes, this time torn but under the same brand, which she hit the stage with during a performance together with Winky D in neighbouring South Africa over the weekend.

Her pair of shoes has left tongues wagging with a section of social media users opting to call them twabam shoes.

Gemma adds to the ongoing craze of funny outfits where artists are opting to go for stage outfits that leave people talking about them even long after the event is gone.

It is a trick that has worked for one Jah Master a rising Zim Dancehall chanter who stormed the scene aided by Facebook videos in which he would sing along to his music playing in the background while adorning crazy outfits.

While the likes of the late Sungura ace Tongai “Dhewa” Moyo and Zora music legend Leonard Zhakata were known to put everything on the line for slick outfits on stage, it seems as if the attention is slowly shifting towards funny outfits that are capable of leaving lasting memories.

The ‘Madness’ Inside Passport Offices