Govt has No Solution To Civil Servants Salary Demands-MDC 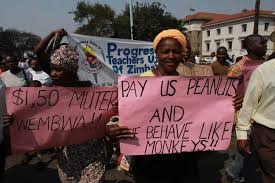 Government is currently locked in a dreadful impasse over salaries with the Apex Council, a body that represents public workers.

Speaking to the press at the party headquarters this afternoon, MDC spokesperson Daniel Molekele said while the party is remorseful of civil servants’ plight, it however has little faith in the government’s capability to meet their salary demands, unless the political legitimacy question is resolved.

“Obviously it (Government) doesn’t have (capability). If we consider the level of salaries that civil servants are getting right now I think it is the worst since independence.  That’s why we are saying the political setup as it stands, does not have the capacity, not even in a thousand years will they be able to resolve this because if we had to give every civil servants ZW$ 4000 where will that money come from?,”

Yesterday the Apex Council staged a demonstration over paltry salaries with the employer playing truancy in the negotiation process since last week much to the chagrin of civil servants.

This comes after the government increased wages by ZW$ 97 starting this month and this they say has done little to cushion them from price spirals.

“Our understanding of that ZW$ 4000 is that it was a negotiating figure, therefore any figure that they would have agree upon with them looking at the facts it will be fine for them. What we are talking about here is bilateral, we have two people agreeing. It was a proposal, it was not a dead-end. Government must then go ahead and negotiate,” MDC secretary for labour, Gideon Shoko said.

The opposition also threw its weight behind the Zimbabwe Congress of Trade Unions (ZCTU) leadership which alleges to have received letters with bullets inside this week.

This is on the backdrop of ZCTU’s threats for a national stay away over the deplorable state of affairs workers are being subjected to.