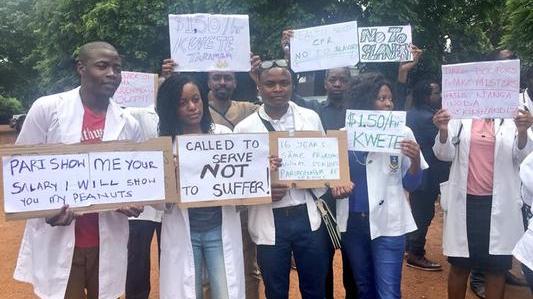 Junior doctors from public hospitals, on Monday disregarded government threats against their ongoing industrial action and chose not to report for duty, charging that threats will not deter them from demanding a dignified wage.

Health and Child Care minister, Dr Obadiah Moyo over the weekend issued an ultimatum to the doctors to go back to work or face disciplinary action before revealing that a better deal had been secured for them.

But the junior doctors were not amused, carrying out a demonstration at Parirenyatwa Hospital this morning as they entered day 35 of their 100 day long incapacitation strike.

“We are not threatened. Since the minister issued his threats on Friday, we decided that as medical doctors we converge here in solidarity, reminding each other that what frightened us is starvation more than these threats, so we just here to remind some of us who are scared that we are going nowhere, we are going to reach the 100 days here not going to work,” Zimbabwe Hospital Doctors Association (ZHDA) treasurer general, Prince Butawu said.

Last week, the Minister said the doctors are breaching their contracts if they continue to be on strike and that they had awarded them a 60 percent wage review that will see the medical professionals pocket a monthly wage of around ZWL$ 10 000. Howver, the doctors refused to accept the pay rise saying the increment does not resonate with inflationary trends currently over 500 percent.

They however argue that the employer has breached end of its contract which they agreed upon.

In 2018, a collective bargaining agreement was reached, with various health allowances reviewed. On-call allowances rates for junior doctors were reviewed from US$ 5 per hour on the basis of capped 72 hours per month to US$ 7.50.

“Our contract states that we were supposed to be paid in US dollars but they sold us a dummy. We cannot continue working, what we want now is not the US dollars they promised us but we want our salaries rated against the US dollar at interbank rate. The very exchange rate they brought at interbank. Now everything has literally gone up. We did not breach any contract, actually the government did. Instead of negotiating with us, they have come up threatening us with a litany of accusations. We are not afraid, we are united,” added Butawu.

Junior doctors have been on strike for over a month now and tensions between them and the employer have escalated following the alleged abduction of their leader, Doctor Peter Magombeyi last month.

ZHDA leadership has also resolved to pull out of the Health Apex council which negotiates with the government, citing that their concerns varied from those of other medical professional the body represent.