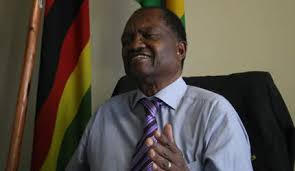 Zimbabwe People First, a new political outfit being spearheaded by former VP Joice Mujuru has urged war veterans to be frank with Mugabe.

In an attempt to set the stage for the much anticipated meeting with the former liberation war fighters on Thursday, President Mugabe, was quoted in the standard saying  that war veterans cannot dictate to him what he should do to re-unite Zanu PF.

However, in a statement released  today, ZPF spokesperson Rugare Gumbo said war veterans should utilise their meeting with Mugabe to remind Mugabe of the need for a democratic Zimbabwe

“As a democratic, inclusive and people centred party, whose main thrust is to BUILD our beloved country through the promotion of the values of the liberation struggle, of self-determination, self-dignity and self-pride, we urge the war veterans, to seize the opportunity of their meeting with President Robert Mugabe, to remind him and his government, the need for a peaceful and democratic Zimbabwe where every citizen enjoys the fundamental freedoms of association, choice, speech and the right to demonstrate and choose a government of their choice.

“We also believe that war veterans, as nationalists, would take this opportunity with their patron, to register displeasure at the economic policies pursued by Mugabe’s administration that are inimical to industrial growth and foreign direct investment,” said Gumbo in a statement.

Rugare Gumbo, who is the former Zanu PF national spokesperson called on the former freedom fighters to boldly speak on threats by Youth and Empowerment Minister, Patrick Zhuwao to close non-compliant  foreign firms operating in the country.

“It is firm belief that the veterans of our liberation struggle will speak against the threat to close the few industries and banks that are soldiering on in an economic environment that is already investor unfriendly.” Said Gumbo in a statement.

The new political party which says the welfare war veterans is of utmost importance, believes that it is against the liberation war values of self-determination and self-dignity, to reduce these gallant sons and daughters of the soil to charity cases which survive on the benevolence of the state president.

“It is therefore incumbent upon the war veterans to speak and act against a system that has pauperized them while enriching a few unscrupulous individuals who obscenely flaunt their corruptly gotten wealth in the form of 50-bedroomed mansions while the generality of Zimbabweans reel under very debilitating economic conditions and are barely able to feed themselves once a day.

“We urge war veterans to remind Mugabe that true leaders do not boast about the houses they build. They boast about the investment they make in people – how they BUILD people,” said ZPF spokesperson.

He added that, “ZPF shall continue to encourage and promote war veterans’ involvement in building a democratic and prosperous nation without the current inherent and pervasive vestiges of corruption.”

Zimbabwe People First, which boosts of  War Veterans as an integral part of its structures and organs said President Mugabe should respect the country’s liberation fighters.

“Under normal circumstances we expect the patron of the War Veterans, who is also the president of the Republic of Zimbabwe, to be fully rally behind the expectations of our liberators and their fight for the unhindered exercise of their fundamental democratic rights including that of congregating for the purposes of demonstrating. Anything other than that poses a big question of “whose side is he on and why?” fumed Gumbo.