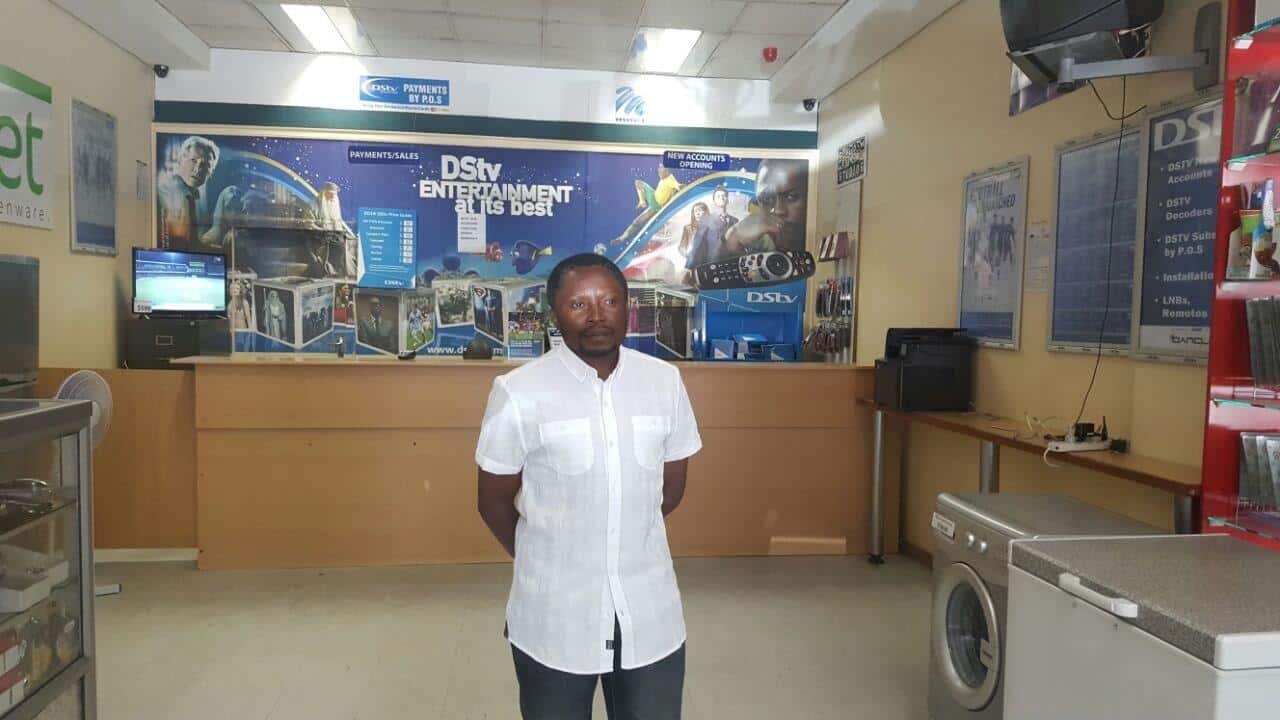 With a chain of five outlets, accredited DStv agent Clive Mhuri is an entrepreneur whose success story is an inspiration to other young Zimbabweans wanting to carve a niche for themselves in the business world.

As a Skynet t/a  MultiChoice Zimbabwe Accredited Agent, he has authority from the brand owners to provide services to the public on behalf of MultiChoice Zimbabwe, which in turn is the DStv brand representative in Zimbabwe. These services include DStv installations, opening of new accounts, re-connections and product changes.

Clive Mhuri hails from the Zvishavane area, where he became an orphan while very young. He grew up in a poor community and relatives raising him could not afford school fees, so he did part-time work at a local school to raise money to pay for his own school fees. He did well at school,  especially in mathematics, and his teacher offered to assist him with school fees up to O Levels.

Clive then underwent a teacher training course but could not find placement as a teacher, so he became a cross-border trader, travelling between Zimbabwe and South Africa to sell anything that was needed in the market to allow him to earn a living.

“One day someone requested me to find a decoder, but I wasn’t sure what this was. I made enquiries and found out, supplied the customer with a decoder and my interest levels rose. Little did I know that that sale was going to change my life forever,” he said.

The demand for decoders grew steadily at this time and he taught himself how to install DStv-receiving equipment through watching friends doing this work. It was a problem time for Clive, who lived in a very small house in Chitungwiza and was suffering from a back injury caused by an accident that he was involved in. Medical costs were a challenge because he was not earning much to sustain himself and his family, so he needed to make this new-found interest pay through providing service work to customers.

Clive was introduced to MultiChoice Zimbabwe by a friend, and this contact led to training as a MultiChoice installer.  A combined passion for the work and a need to earn enough money to pay medical bills led to the speedy growth of his business, mostly through referrals. A high level of customer care and a determination to get a proper job done made him successful.

Clive has now become one of Zimbabwe’s most outstanding MultiChoice Accredited Agents and despite current economic challenges, he is steadfast and committed to achieving even greater things. His business has five branches, and in addition to a range of DStv-related services, he also retails top of the range home appliances.

“We know his model of work is both honest and successful and we urge other would-be agents to emulate him in all he did to get where he is now. We also think he has a bright future ahead of him and wish him well for the future. What we like is  that he has been able to make an honest living and carve a place for himself in the business world through our brand, something he is doing legally and with an ethical foundation.”