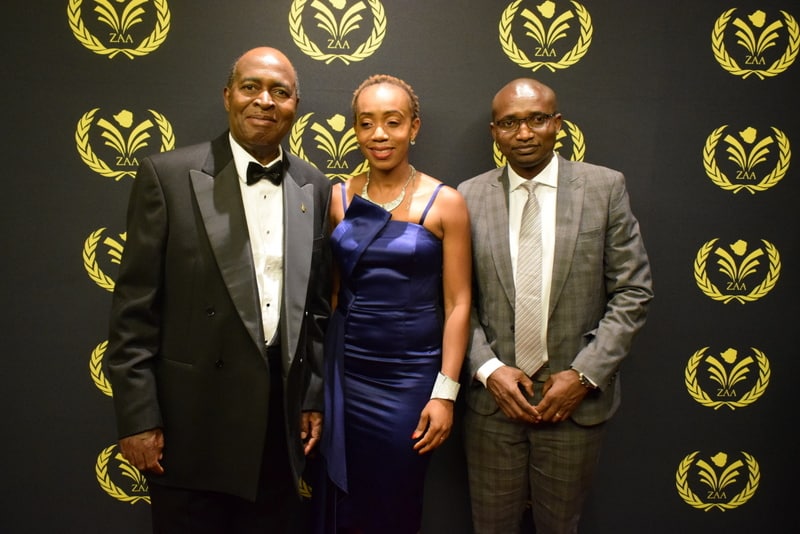 Zimbabwe Achievers Awards UK hosted an excellent awards dinner gala on their 9th anniversary at the Millennium Gloucester Hotel in London on Africa Day which saw a number of people and organisations in the diaspora honoured for their contributions within their communities and beyond.

The event was well attended and featured people from all walks of life who included dignitaries such as Zimbabwean ambassador to the UK Rtd Colonel Christian Katsande, Ambassador Tim Morris as well as various other guests who came out to a night of celebration that was marked by the launch of the ZAA Foundation.

In his speech, Ambassador Katsande commended all the Zimbabwean people and organisations for doing amazing work in the diaspora and representing the country well and also exhorted people to make use of the opportunities opening up in the country for development.

The Ambassador’s sentiments were echoed in a speech read out on behalf of the Minister of Information Honourable Monica Mutsvangwa, who reiterated that Zimbabwe is open for business and Zimbabweans should continue to work towards achieving all national and individual aspirations.

A number of people  were recognized for their endeavours abroad and Ambassador Morris congratulated the diaspora community for their contributions as well as the ZAA team the initiative.

A number of awards in different categories were handed out and notable winners on the night included Young Achiever of the Year Stephanie Travers who scored a first for Zimbabweans by becoming the Fluid Engineer for Petronas on racing ace Lewis Hamilton’s Mercedes team in Formula 1. Rugby star Farai Mudariki was awarded Sports Personality of the Year whilst CNN’s Samantha Tapfumaneyi took the Female Personality of the Year on a night when the Chairman’s Honorary Awards were handed to various people that included Sir Richard Heygate, Dr Melanie Abas, Ennie Mupoto and Vusa Mkhaya among others.

The 9th edition of the annual awards event was sponsored by WorldRemit, who were also running a promotion for people making their first transaction to Zimbabwe free of charge with the promo code ZAAPROMO. Other sponsors included Genesis Law, Blose Architects, eZimtech Distributors, Indlovukazi Guesthouses and Chiltern Support & Housing,Tugela Group, Henco, Made in Zwe and Stark Property Group among others.

ZAA also launched their independent goodwill arm ZAA Foundation which will give back to various communities and national causes for the upliftment of the community. The first targeted initiative was the contributing to the welfare of the Zimbabwe Netball Team travelling to the UK for the Netball World Cup and £500 was raised in cash whilst pledges amounted to £2000 from various business people on the night.

Speaking at the event ZAA Foundation Chairperson Beatrice Kumalo hailed the initiative and the generous response to the call for the worthy cause.

“We would like to thank all of us for showing oneness and generosity in giving back to the communities and look forward to continued engagements and collaborating on identifying needs within our communities and helping in whatever way we can,” she said.

The Zimbabwe Achievers Awards were started by Conrad Mwanza in 2010 in the UK and has now spread to the USA, Australia, South Africa and Canada which is in its inaugural year, to recognize and honour Zimbabweans who are in the diaspora. Plans to bring the awards home to the motherland were mooted at the event with Victoria Falls tipped to be the venue for next year’s ZAA 10th Anniversary through Zim Thrive initiative which aims to host the biggest homecoming for diaspora based Zimbabweans in the country at one time.

Meanwhile, with the South African and UK editions wrapped up, attention turns to the Inaugural ZAA Canada Edition set for Saturday 29th June 2019 at the Radisson Hotel in Edmonton. Voting for the nominees is open until 2nd June on www.zimachievers.com/canada/ whilst tickets to the event can be purchased online on www.zimachievers.com/canada/buy-tickets/

ZAA UK Professional of the Year

ZAA UK Business of the Year

ZAA UK Innovation of the Year

UK Based Music Artist of the Year

Sports Personality of the Year

ZAA UK Breakthrough of the Year

ZAA UK Event of the Year