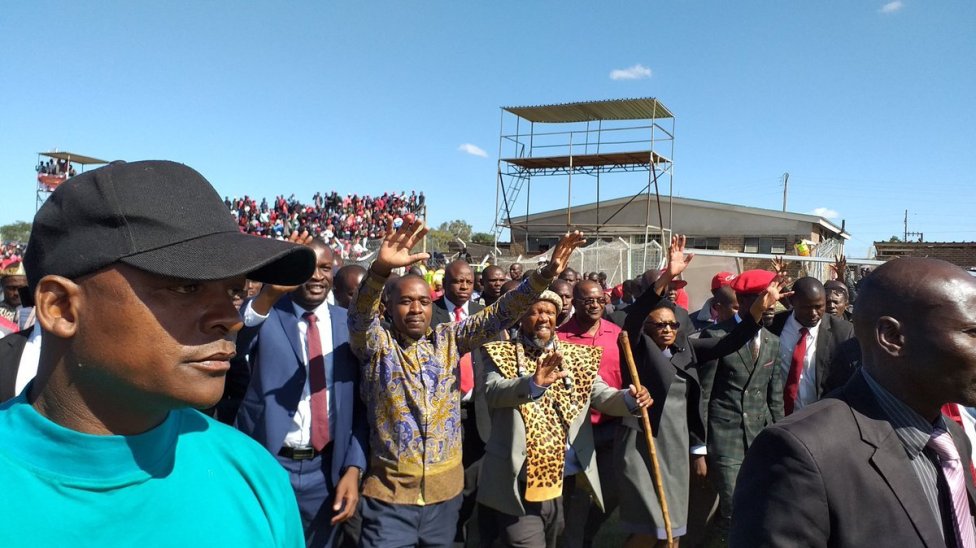 GWERU- Chief Nhlanhlayamangwe Ndiweni of Ntabazinduna who yesterday graced the ongoing Movement for Democratic Change’s (MDC) fifth congress in Gweru ripped into the Constitutional Court and Chief Justice Luke Malaba describing his ruling on the 2018 election petition as worse than what his headmen makes when dealing with community issues.

“We have a courts President but in Chamisa here, we have a popular president,” said Chief Ndiweni.

Despite constitutional dictates that hammer traditional leaders to be neutral, most chiefs have unapologetically disclosed and expressed their support for the ruling party ZANU PF.

But addressing MDC supporters at an event that was also graced by Ugandan opposition leader Bobi Wine and Kenyan opposition delegates at Ascot Stadium, Chief Ndiweni said he will serve everyone equally and his presence at the MDC congress was evidence to that.

“I am a chief and my role even in the constitution is to equally represent everyone regardless of their affiliation hence my presence here,” said Chief Ndiweni.

He trashed the ongoing political dialogue between ZANU PF and losing 2018 election presidential candidates without MDC leader, Nelson Chamisa describing it as a joke.

“The so-called political dialogue without a meditator is nonsense. It is like a boxer who says I can box and referee my match at the same time.

“A neutral third party who has Zimbabweans’ wishes at heart is requisite if this dialogue is to make any sense,” he said.

Meanwhile, addressing the same gathering, MDC president Nelson Chamisa disclosed that he invited Chiefs Council President Chief Fortune Charumbira as well as the Speaker of Parliament Advocate Jacob Mudenda to their Congress though they did not show up.