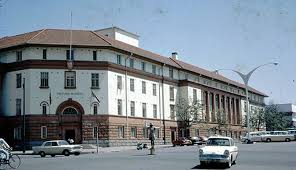 The Judicial Services Commission (JSC) is set to complete the construction of Lupane Magistrates Court in a move that is aimed at easing the pressure on Bulawayo courts which are currently serving two provinces.

The completion of Lupane Magistrates Court, according to Deputy Chief Justice Elizabeth Gwaunza expected to enhance universal access to justice throughout the country.

Officially opening the 2020 legal year in Bulawayo today, Gwaunza said Lupane Magistrates Court will be ready for use by end of this year.

“At Lupane, all the preliminary work was finalized and construction commenced during the last half of 2019. The progress at the site is very encouraging. At that rate of progress, it is projected that the courthouse will be ready for occupation by the end of 2020,” Gwaunza said.

In 2018, JSC set aside US$ 1 million towards the project but fiscal pressures delayed availability of resources only to commence construction late last year.

The development comes at a time the Matebeleland North province did not have a provincial magistrate court compelling villagers within the province to travel long distances to access justice.

Authorities have hence targeted construction of at least one resident court per district across all the country’s provinces.

“We acknowledge that residents of places like Bulilima, Insiza, Umguza and Mangwe still travel long distances to access justice. It is a priority for the Commission to establish at least one resident court in each district of the country in the not too distant future,” Gwaunza added.

This coincides with the resumption of works on the Gwanda Provincial Court in Matebeleland South which is however expected to be completed next year.

“The construction of Gwanda Provincial Court which had stalled during the course of the year under review is back on course. Whilst the project may not be completed by the end of the year, significant progress is expected to have been made by that time,” Gwaunza said.

To complement efforts to decentralize justice, the Deputy Chief Justice said the JSC established a Supreme Court registry in Bulawayo last year to save litigants from the southern regions of the country from travelling all the way to Harare to file their processes.

Speaking at the same occasion, Gwaunza encouraged Investigators and arresting details to continue horning their skills and conduct thorough investigations before arresting those suspected of engaging in corruption and bringing them to court.

He said “Knee-jerk” arrests only serve to frustrate the ends of justice as the public will consequently feel let down by the system which leads to ‘catch and release’.

At Bulawayo Magistrate Provincial court, 9215 cases were received during the period under review and 9086 matters were completed.

However, Bulawayo Province commenced the year 2019 with 405 criminal cases and closed with 534.