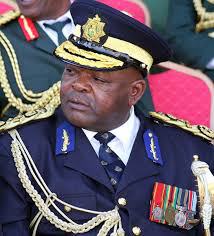 Police Commissioner General, Godwin Matanga has blamed City of Harare for the Central Business District (CBD) skirmishes that left two people dead and four badly injured while property worth thousands of dollars was razed down by a fire.

The skirmishes happened soon after the Ministry of Local Government, Public Works and National Housing had reversed a decision by the city council to ban commuter omnibuses from operating in the Central Business District.

Matanga could not be drawn into accepting blame for the actions of police officers who opened fire on unarmed civilians resulting in the death of two people while the third one is battling for life at Parirenyatwa Hospital.

“The incident is a culmination of an operation code named Clean Up Harare Central Business District, which was being conducted by the City Of Harare.

“The police and other security agencies were supporting the municipality of Harare to de-congest the city centre of commuter omnibuses and mushikashika,” said Commissioner Matanga.

He however, said a team of detectives is currently ceased with the matter to extensively establish the cause of the violence which left several cars burnt after some members of the public retaliated and demonstrated outside the Harare Central Police Station following the death of the two civilians.

“Violence in whatever form is not tolerated and the investigation will leave no stone unturned, perpetrators will be brought to book and there are no scared cows,’ warned Commissioner Matanga.

Harare City Mayor, Councillor Ben Manyenyeni was not available for comment as his phone went unanswered but is on record saying they local authority was not involved in the operation.

“The project by the Ministry of Local Government, Public Works and National Housing with the Joint Operations Committee of the Zimbabwe Defence Forces to de-congest the Central Business District of Harare with the removal or re-location of kombi mini-buses commenced in earnest today

“As the policy makers we would want to be more involved in any future plans for projects of this nature within Harare,” wrote Manyenyeni on his Facebook page.

According to eye witnesses, a team of police officers from the Harare Central Police Station was manning the Chitungwiza flyover area when an angry mob confronted them.

The mob started to throw stones and concrete pillars demanding to know why they the police had earlier dispersed them along side Harare Municipal Police.

In retaliation, the police opened love fire which killed two people while three police officers were injured. Prpoperty worth thousands of dollars was destroyed.