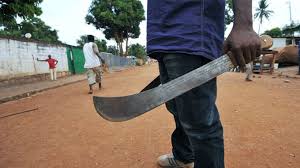 In a statement released yesterday, ZIDAWU exonerated gold miners from the atrocities saying these are criminals out to take advantage of the violent activities happening in the gold sector.

“With Zimbabwe’s reputation as a country with best security forces in Africa surely something stern has to be done before this degenerate into anarchy. As ZIDAWU we can safely conclude that those involved in these atrocities are nowhere near gold miners but they are thugs and murderers.

“Forget about their origins as from Shurugwi as this may mislead us. These are lazy criminals clothed in miners skin yet they want to cause mayhem. With abundance of gold in Zimbabwe, there is no reason to be slashing fellow miners to death. More so, using bullying tactics to siphon gold and other valuable properties of miners,” the union said.

ZIDAWU appealed for political will from top leadership to end the menace and ensure citizens are safe from these robbers and murderers.

“There must be political will from top leadership and not just pay lip service.  It is not time to make counter accusations and throwing tantrums at each other. As ZIDAWU we demand immediate action against MaShurugwi. History will judge us wrongly one day as a nation for failing to deal with this matter decisively,” the union added.

Meanwhile the opposition Movement for Democratic Change (MDC) has accused the ruling party of funding notorious criminals who are causing havoc around the country.

Parliament has also joined the fight to end machete terror by setting up an inquiry into the origins and means to address the problem.

Biti, Ncube Responsible For US Sanctions on Zim: Parardza