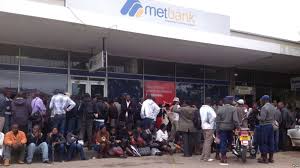 Rural Teachers’ Union of Zimbabwe (RTUZ) was last week  forced to shelve plans of a mass protest  after many of its members failed to access their salaries, as cash crisis in the country continue looming.

Speaking to 263chat Obert Masaraure RTUZ president said the decision to postpone the demo which was slated for 28 April in Harare follows the failure by the organisation’s members to access their salaries.

“The decision was reached after thousands of our members informed the national office that they were failing to access cash from banks countrywide and could therefore not be able to travel for the important event, ” he said.

The march was a campaign for the restoration of teacher dignity in which rural teachers were demanding cessation of 7,5 % salary deduction, vacation leave and their  share of the $US15 billion looted from diamond mining.

RTUZ called  upon government to deal with the liquidity crisis with immediate effect saying if not addressed the problem will affect the resumption of the learning season.

“We call upon  the fiscal authorities to find a lasting solution to the cash crisis as this might also affect the turn out of teachers on opening day next week.
“Parents may also fail to access fees for their children and this will derail the resumption of learning season.We advise the government to use the postponement of demonstration as an opportunity to address our concerns,” said Masaraure.

He added that rural teachers were demanding  the regularisation of vacation leave, cessation of the non transparent pension deductions and a compensatory rural allowance.

Watch Video below for our interview with RTUZ President  Mr Masaraure

I Have Been Misunderstood When I Say ‘God Is In It’: Chamisa

I Have Been Misunderstood When I Say ‘God Is In...