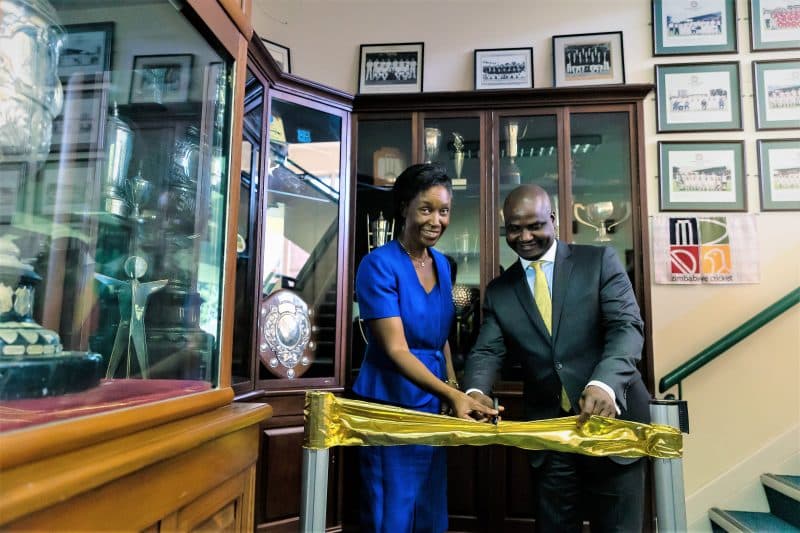 Zimbabwe Cricket (ZC) has renamed the Chairman’s Enclosure at Harare Sports Club in honour of the late Mr Peter Chingoka.

Mr Chingoka served as ZC chairman from 1992 to 2014, working selflessly and tirelessly to develop and elevate the game of cricket in Zimbabwe to world-class standard.

The renaming ceremony – which took place today as Zimbabwe faced Sri Lanka in the first of two Tests at Harare Sports Club – was attended by the late Mr Chingoka’s widow Shirley, children, grandchild, brothers and other relatives and friends.

In his address at the event, ZC chairman Mr Tavengwa Mukuhlani hailed the late Mr Chingoka for the “pivotal role he played in bringing full membership and Test status to Zimbabwe”.

“He played a pivotal role in nurturing and developing young cricketers across the racial divide,” Mr Mukuhlani said.

“For a youngster who makes his debut – we have three kids who have made their Test debut in the match currently underway – Peter was their father; to those who have played 30 odd Tests and their form has dipped, he was a mentor; and to those approaching retirement, he was an advisor.

“What we are doing today is to demonstrate to the Chingoka family and the cricket family what Peter meant to us and what he continues to mean to us as an organisation and as a sport.

“I’m not a keen history student, but one thing I have realised is that when you lead people you must not distort history and this occasion today makes the history of ZC correct.

“We stand here to rename the Chairman’s Enclosure which was built when Peter was chairman in 2003 when we hosted our group games for the World Cup.

“We found it befitting that the place that was his second home be renamed to Peter Chingoka Balcony.

“We cherish the moments we have had with Peter and the part that he played in the history of cricket in Zimbabwe.”

“As a family, we feel greatly honoured – in fact, we have no words to express ourselves with respect to what ZC has done for our brother,” he said.

“This was not Peter’s second but his first home. Thank you for the honour that you have bestowed on him. We will always cherish this.”

The first black Zimbabwean cricketer to play at a high level, the late Mr Chingoka was a gifted seam bowler and lower-order batsman whose greatest achievement was his appointment as captain of the South African African XI that played in the Gillette Cup, a List A knockout competition, in 1975-76 and 1976-77.

On 15 January 1983, he made history again by becoming the first black member of the then Zimbabwe Cricket Union (ZCU) board of control.

Mr Chingoka was to make immense contributions to the game over the years as Zimbabwe became a force to be reckoned with on the international arena.

His influence extended beyond the borders of Zimbabwe, becoming a respected member of the International Cricket Council board while he also spearheaded the development of cricket throughout Africa through the Africa Cricket Association which he led for some time.

After stepping down as ZC chairman in 2014, Mr Chingoka remained in service to the game as an esteemed and admired source of wisdom and guidance for the cricket family up to the time of his passing.

The March Of The Fall Armyworm in Zimbabwe