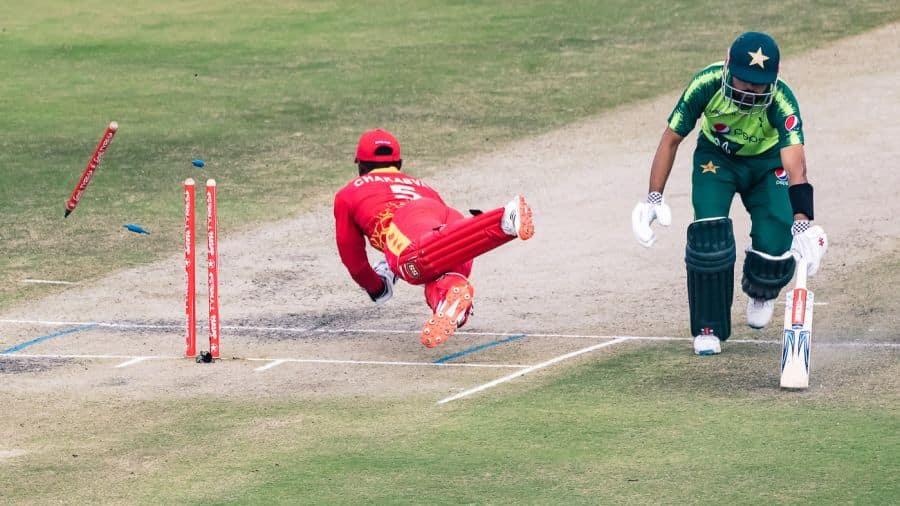 Zimbabwe beat Pakistan for the first time in a T20I match in their 16th attempt, ending a nine-match losing streak in the process in Harare on Friday, while also winning their first T20I at home since beating India in 2016. The 19-run win in a low-scoring game helped Zimbabwe level the series 1-1 with one game to go.

On a slow surface, Zimbabwe set Pakistan a target of 119, which seemed gettable for the most part. It ended up being the lowest score Pakistan have failed to chase down, as they were bowled out for 99. They got off to a slow start, and then suffered a massive middle- and lower-order collapse, losing seven wickets for 21 runs in 26 balls to crash from 78 for 3 to their lowest T20I total since 2016.

Luke Jongwe, who made his comeback to the Zimbabwean team in this series after a five-year absence because of eye and head injuries, finished with the best returns by a Zimbabwean in T20Is – 4 for 18 – and took wickets at the top and bottom of the Pakistan line-up. He was supported well by legspinner Ryan Burl, who took 2 for 21, the other tweakers in the attacks – Wesley Madhevere and Wellington Masakadza, who went at less than 5.50 run an over – and left-arm seamer Richard Ngarava, who bowled three overs for ten runs.

Zimbabwe’s ground-fielding was also much improved after they dropped several chances in the first match, but they still have some work to do with the bat. Only one of their batters, Tinashe Kamunhukamwe, scored over 20, their highest partnership was 28 for the second wicket between Kamunhukamwe and Tadiwanashe Marumani. And still, it was enough to beat Pakistan.

Babar Azam’s 41 looked like it would take Pakistan over the line despite a growing required run-rate. Pakistan needed to score at less than six runs an over to win when they started, but needed 47 runs off the last five overs, at a rate of over nine an over. When Azam was dismissed, they fell apart, making Sunday’s third match a decider.

Arshad Iqbal has an impact
Debutant Arshad Iqbal made more of an impression than he may have planned to with the third ball of his second over when he snapped Tinashe Kamunhukamwe’s helmet in two. Not in half. Into two pieces. Kamunhukamwe backed away trying to pull a bouncer on leg stump and was struck. The outer shell was removed to expose an inner shell that remained on Kamunhukamwe’s head. His grille remained intact, he passed a concussion test, continued batting and finished as Zimbabwe’s top scorer, so it wasn’t just Iqbal who made an impact. The bowler did get in the wickets’ column, though, as he bagged his first international stick when Tadiwanashe Marumani inside-edged as he tried to heave and Mohammad Rizwan took a good, diving catch to his left.

Qadir denied, twice, then rewarded
Usman Qadir could have had a wicket in his first over when Kamunhukamwe reverse swept and the backward point fielder went at the chance one-handed but didn’t get there. He also could have had a wicket in his second over when Marumani charged a googly and missed completely, twirled around and stretched as far as he could to get his bat back in his crease, which he did. Mohammad Rizwan responded quickly behind the stumps and broke them as Marumani’s bat bounced in the air. Prior to 1 October 2017, Marumani would have been out, but with the rule change, which says that if the bat bounces after being grounded, the batter is deemed safe. Qadir had to wait until his final over for some reward. Burl attempted a reverse sweep but scooped the ball in the air to give Rizwan a simple catch.

Jongwe’s joy
Having seen the success the Pakistan attack had with variations of pace, Jongwe started his spell with a slower ball. Rizwan, who had been scoring at a decent rate, scooped a catch gently to extra cover where Tarisai Musakanda took a simple catch. Given that Rizwan was the top-scorer in the first match and has been in a rich vein of form and that Jongwe was making his return, his joy at his success spilled over. A la Tabraiz Shamsi, he removed his boot and made an imaginary call before being congratulated by his team-mates.

Jongwe had reason to use shoe-phone again when he was brought back to bowl the 16th over, with Pakistan needing 47 runs off 30 balls. There were six runs scored off his first four balls and with boundaries scarce, Azam decided he had to try and find one. His attempt came off a slower ball, which he attempted to force over the covers, but it got the splice of the bat and sent a chance to Wesley Madhevere at deep cover-point.

If that wasn’t enough, Jongwe had two more big reasons to celebrate when he was tasked with bowling the final over and defending 20. A run-out off the first ball followed by two dot balls meant that Zimbabwe had all but won the match halfway through the over. With almost no chance of victory, Haris Rauf hit the fourth ball to Brendan Taylor in the covers before Iqbal was dismissed for a first-ball duck to end the innings with a ball to spare.

Asif Ali’s issues
Pakistan’s middle-order problems show no sign of resolving, especially as they keep rotating between the Alis. They left Haider out of this match and brought Asif back, but he only managed a single before failing to read a Ngarava slower ball and sending it straight to Donald Tiripano at mid-off. His nothing shot came at the worst possible time, and extended the period in which he has not scored more than 30 in a T20I to 18 months, when he got past the mark against New Zealand in Dubai in November 2018, 14 innings ago.