COPA Coca-Cola Team Goes Into Camp Ahead For Continental Challenge 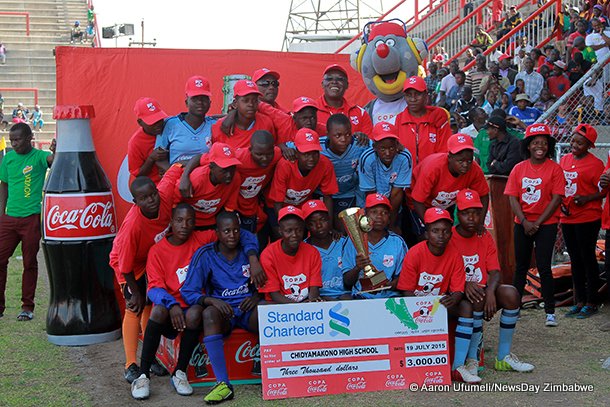 The teams, comprised of 16 boys and 16 girls will be camped at Prince Edward High before they fly for their continental tournament running from 8 to 16 December.

Pamushana high school coach, Bernard Matenga will lead the boys while Sisasenkosi Mapungwana who led Mpopoma high school to this year’s national finals will superintend over the girls.

“We are excited to see a bigger edition of the COPA Coca-Cola continental tournament. Last year we had a global camp that featured five-aside teams, but this year we having full eleven aside teams.  What is more exciting is that we are taking the girl-child on board. The girls are making their second appearance after their inaugural appearance last year at the global camp held in Durban South Africa.  COPA Coca-Cola has changed the lives of many teenagers and we hope this tournament too will be a life changing opportunity for the participants,” said Coca-Cola Senior Brand Manager, Vee Chibanda.

National Association of Secondary Schools head in charge of Soccer, Albert Mucheka hailed Coca-Cola for affording the youngsters life changing opportunities to represent the country at a continental tournament saying it will go a long way in improving sporting activities in line with the new curriculum.

“As NASH we applaud, appreciate and express our most profound gratitude to Coca-Cola for their continued support and partnership with schools to improve sporting activities in line with the new curriculum. “We are aware of the economic conditions prevalent in the country at the moment and clearly for a corporate to come up with such a sponsorship is commendable.”  said Albert Mucheka

COPA Coca-Cola originated in Zimbabwe in late 80s and is a global youth football tournament that supports the development of grassroots youth talent.

The tournament exposes hundreds of youths from far-flung corners of the country to life-skills, training and world class football coaching, and provides an opportunity for these budding football stars to meet and interact with peers from other parts of the region and the world.