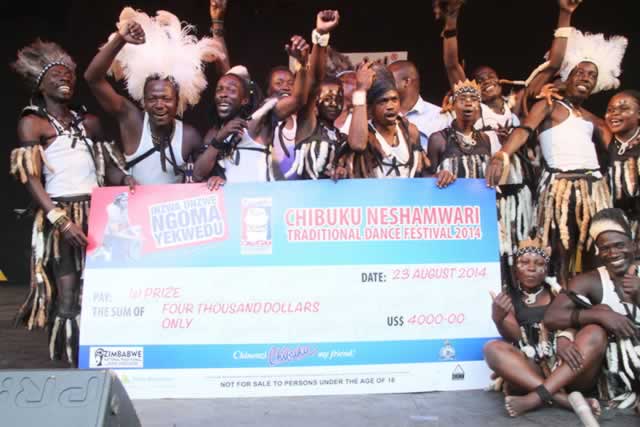 The Mufakose based traditional dance group Culture Warriors will represent Harare at the Chibuku Neshamwari National finals set for Bulawayo in August after emerging winners from a pool of 13 other groups.

The Mufakose group played the Dinhe dance to walk away with $300 prize money followed by another Mufakose based group Dedza whose Chewa dance saw them walk away $200 richer.

In an interview with 263Chat leader of Culture Warriors, Peter Munjodzi Mhumhi said “after spending a lot of time working with other groups, I thought of creating my own group which qualified to the finals in 2010 and for the past 6 years we have been working on this project which made us have a ticket to the finals also.”

Munjodzi Mhumhi is confident that his group will make it in the finals.

“We have a lot of dances that we play so we are going to go back to the drawing board and polish them so that we may succeed in the finals in Bulawayo.”

National Arts Council of Zimbabwe (NACZ) official who attended the competitions, Oliver Chauke called on artists to work hard adding that his organisation is ready to help them to showcase their works.

“National Arts Council of Zimbabwe is prepared to help artists to showcase their works but they need to work hard” said Chauke.