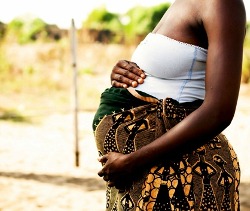 Wrapping a tattered scarf around her protruding stomach, one can tell she is between five and six months pregnant.

She walks timidly towards the council-drilled borehole, bypasses a long queue that probably emerged in the wee hours of the morning.

Elder women let her fetch water anyway, knowing how pregnant women cannot endure long queues.
Memory Madziva(pseudo name) is a 15-year-old mother-to-be who recently sought to escape poverty at home, and ran to stay with her 18-year-old boyfriend in Eastview, a shanty settlement, east of Harare.

Memory is one of the thousands of teens who due to worsening poverty brought about by the Covid-19 pandemic chose to run away and elope.

“My father is a vendor and normally sells at a street corner in the CBD. The council and security forces have not made life easy for him as sometimes he returned home with no stock or profits after bailing himself out of remand. My mother maintains a vegetable garden and sells the surplus,” she said.

Memory could not digest the excruciating poverty at home each time her parents struggled to put food on the table since the lockdown restrictions had thwarted their source of livelihood.

During lockdown, the Harare City Council destroyed vending stalls across Harare in a campaign to bring orderliness in the city.

For many, like Memory’s parents- it meant staying at home without any income.

“We sometimes stayed home all day fearing soldiers outside but then hunger forced us go out,”

“To lessen the burden for my parents, I had to move in with my boyfriend who was doing quite well as a tout by Gazebo shops. To me that was a better option because he could afford a chunk of meat every day,” she says.

Now Memory is part of the 5 000 teenage girls in Zimbabwe who fell pregnant between January and February 2021 and about 1,800 who entered early marriages during the same period, according to statistics released by the Women Affairs Ministry early this year.

In March this year, United Nations Children’s Emergency Fund (UNICEF) warned that school closures, economic stress, service disruptions, pregnancy, and parental deaths due to the pandemic are putting the most vulnerable girls at increased risk of child marriage.

It further stated that worldwide, an estimated 650 million girls and women alive today were married in childhood.

According to the Zimbabwe Peace Project (ZPP) Accountability Tracker, child marriages have become an issue of concern.

“This was worsened by the continued deferment of opening of schools, creating an idle young girl exposed to sexual activities. A girl child has more sexual reproductive health needs, forcing them to consider early marriage as an option to cope with the financial demands,” read the report.

ZPP urged the government to adequately equip the Social welfare department so that it can assist those in need to avoid child marriages induced by poverty during this time of crisis.

In an interview with 263Chat, Ekenia Chifamba , Director of Shamwari Yemwanasikana, an organization that specializes in sexual reproductive health (SRH) issues among adolescence, said often where income streams are cut the girl child is commonly viewed either as an economic burden or a survival mechanism.

“Having noted the girls are at the center of child marriage either due to lack of information, capacity to demand or defend their own rights, we have created self-awareness empowerment platform which are safe spaces for girls learning and sharing. These platforms called Dandaro Revanasikana enables girls to openly share information, ideas and experiences to empower each other with capacities to respond and avoid child marriages.

“We are also taking the appreciation of the critical role men play in ending or sustaining child marriages. As such we have created men and boys’ forums which are focused on influencing attitudes and behavior changes within men in regard to child marriages and other related exploitations. We are moving with the agenda of creating communities that have men who as allies and supporters for safe girls development,” said Chifamba.

Chifamba urged the government to expedite the finalization of marriage bill as a law which will create an environment to arrest and charge perpetrators of child marriages.

“There is need for government to deliberately finance and create or expand youth friendly services facilities that cater for the needs of sexually active young people without discrimination and stigma as has been with the few existing facilities,” she said.

Child marriage is commonly driven by various cross cutting drives that either lead or derive from poverty.

Usually in unstable economies jobs and income streams tend to dwindle a situation that had a direct impact on the lives of young girls.

This has been a global experience and Zimbabwean girls have not been spared from the impacts of economic downturns.