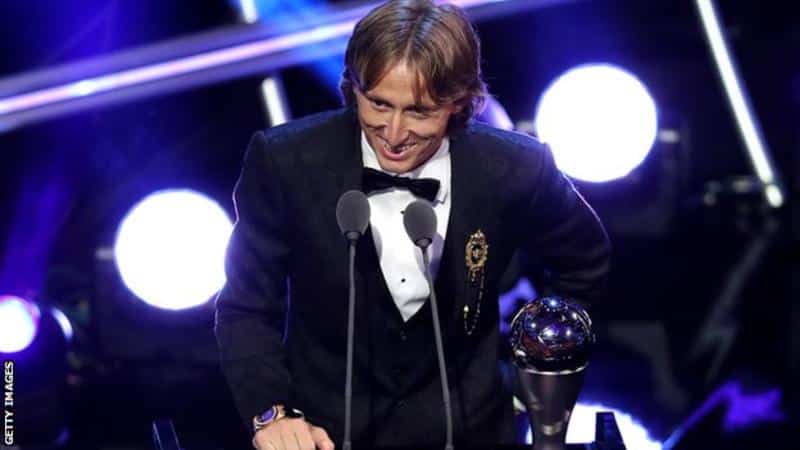 Modric won his third Champions League title in a row in May and guided Croatia to their first World Cup final in July.

Salah received the Puskas award for the best goal, for his effort against Everton in the Premier League at Anfield last December.

Peru’s supporters won the Fifa Fan Award after many thousands of them flew to Russia in support of their nation – playing at the finals for the first time since 1982. This accolade was voted for solely by supporters.

What’s the difference between the Ballon d’Or and Best Fifa?

This is the third edition of the Best Fifa Football Awards, set up after football’s world governing body ended its association with the Ballon d’Or award.

A version of the Ballon d’Or has been awarded by France Football magazine since 1956, but was merged with Fifa’s World Footballer of the Year award from 2010 to 2015.

The governing body then introduced the Best Fifa Football Awards, with Portugal international Ronaldo the first recipient of its main prize in January 2017.

Voting for the player and coach categories was conducted by national team captains and managers, selected journalists and, for the first time, an online poll of fans. Each accounted for 25% of the total.

Luka Modric ended Cristiano Ronaldo and Lionel Messi’s dominance of the best individual accolades in world football, which had stretched back to 2007, when Kaka won the Ballon d’Or.

Modric made 56 appearances for club and country as he won the Champions League and reached the World Cup final – beating England in the semi-final – in what he admitted before the ceremony was his “best season ever”.

Former England international Chris Waddle, working as a BBC Radio 5 live pundit, indentified Modric as the type of player that Gareth Southgate’s men were missing in that semi-final because of his ability to single-handedly influence games with his understanding and distribution.

The former Tottenham midfielder won the Golden Ball award for the best player in the World Cup after their final defeat by France.

He scored in Croatia’s opening two matches of the group stages and also set up one goal.

Croatia manager Zlatko Dalic paid tribute to his talisman after the result was announced, saying the midfielder is like “my assistant in the field”.

“Luka Modric is the captain of my team, he’s the best player in my team and in the world, and he deserves this award,” said Dalic.

After receiving the award, Modric said he was “honoured” and thankful to all the coaches he has worked with for getting him to this stage.

“This award is not just mine. It is my team-mates from Real Madrid and Croatia. Without my coaches, I would not have won this and without my family I would not be the player I am today,” said Modric.