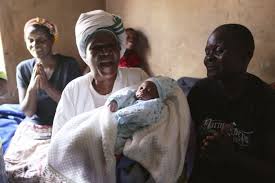 Esther Zinyoro, affectionately known to her legion of clients as Mbuya Gwena of Mbare became an overnight heroine following the unwavering assistance she has been giving to expecting mothers, most of whom were stranded after council nurses joined the striking doctors on industrial action.

Most women, especially those from the white garment churches have spoken glowingly about the work she has been doing under challenging circumstances.

However, after successfully negotiating and agreeing on salary adjustments, nurses at a nearby Edith Opperman council clinic returned to work and ordered Mbuya Gwena to shut down her back yard maternity ward, but four weeks after being told to “close shop”, Mbuya Gwena’s place is still operational.

Speaking to 263Chat from her base  recently, Mbuya Gwena said she has started receiving pregnant women again, but this time around in smaller numbers.

Mbuya Gwena, who delivers an average of six babies per day said pregnant women are being turned away from hospitals for different reasons.

Mbuya Gwena who is a member of the St Johns apostolic church said running water has been her biggest challenges as she seeks to assist the nation during this time when most health centres were not operational due to doctor’s incapacitation.

“Actually, water has been the biggest problem for me here. At the height of the doctors and council nurses strike, Doves came to my rescue for few weeks by providing water tanks, but they have since stopped and taken away their water tanks,” she said.

A lot of babies that were delivered at her home are being successfully issued with birth certificates.