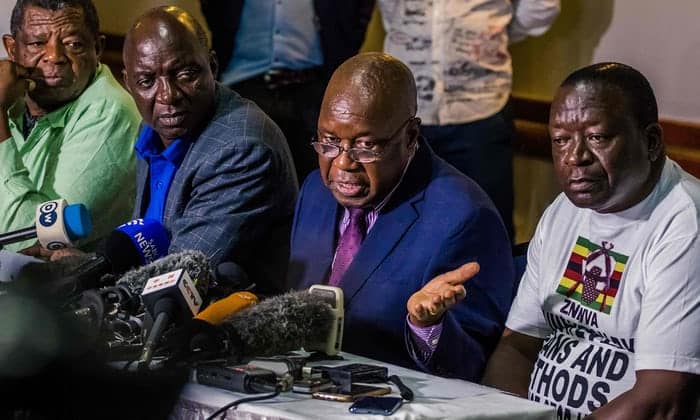 A group of disgruntled war veterans have dumped the Christopher Mutsvangwa led Zimbabwe Liberation War Veterans Association (ZLWVA) to form their own splinter saying politicization of war veterans movement has foiled efforts to express their views on the prevailing economic and political situation in the country.

Addressing the media in Harare today, the newly formed war veterans group, led by Abraham Mutsikwa said they were duty bound to fight against the evils of corruption, theft of public wealth and ethnic ‘cleavages’ that brought Zimbabwe to its knees.

“We went to war with the spirit of liberating Zimbabwe and we were taught not to persecute people prior to their political affiliations. We were also promised some rewards but when we came back those who were rewarded with top ranks were the same people who were persecuting black people.

“Even up to now if our children ask us what we really fought for, we do not have an answer. We used to be scared because we know that if you speak against them your hand will be cut off or something bad will happen to you, but now we are saying no we should stand up and speak against human abuse, against corruption and against everything which we know is bad for this country,” said Karen Kazingizi one of the disgruntled war veterans.

Our nation must be united and everyone must uphold the interests of Zimbabwe first and foremost. Politicians and political parties must fight primarily to remove corruption, theft, politically motivated violence and desist from dividing our nation to fulfill individual and party egos,” added Kazingizi.

She further called on government to work towards ensuring that all looted wealth is returned to the people and perpetrators brought to book, bemoaning the divide and rule strategy by those in power.

“Surely you can bear witness that we did not fight to replace settler colonial oppression with elite bourgeoisie oppression. No this is not what we fought for. We did not fight for self aggrandisement and naked plunder of national wealth or mortgaging of the country resources. We did not lose our loved ones for this neither,” she said.

Responding to questions on what had forced them to take this route, Wilbert Zvakanyorwa  Sadomba said they were fed by with the political capture of war veterans by political parties and could not continue pretending as if everything was fine when it was not.

Zimbabwe Under-14 Side Set For SA Tourney