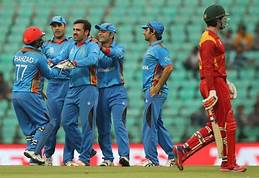 The Zimbabwe team put up a dismal performance in the fourth one-day international against Afghanistan at Sharjah on Friday, with their 10-wicket defeat being one of their worse ever.

Zimbabwe won the toss and decided to bat on a good batting pitch; all it required was good batting.

However, this was to be one of Zimbabwe’s worst batting displays, except for Craig Ervine, who shone out among the poor efforts of his team-mates, who produced one soft dismissal after another.

Zimbabwe lost their opening batsmen for just 15 runs: Solomon Mire (9) and Hamilton Masakadza (4), who made little attempt to rotate the strike with singles, both being clean bowled by Mujeeb Zadran.

Tarisai Musakanda, replacing Malcolm Waller in the team, struggled at the crease for nine runs, but Brendan Taylor appeared to be in fine form, hitting Mujeeb Zadran for two sixes over square leg in an over.

It was all the more frustrating, then, when Taylor fell for 30 to a soft dismissal, driving a catch straight to deepish mid-off, and Zimbabwe were 66 for four.

Sikandar Raza made only four before he too fell to an unwise sweep, lbw to Rashid Khan, to make the score 74 for five.

The later batsmen had little to offer, and only Ervine, fighting his way back to form, saved the side from complete disgrace as the score slumped to 103 for nine.

While Blessing Muzarabani nobly kept his end up with more success than most of the earlier batsmen, Ervine began to open up and played some fine strokes as the last wicket added 31 runs in nine overs.

Finally Muzarabani was bowled by a fine ball from Mujeeb Zadran, having nobly survived 17 balls without scoring.

The Afghan openers, Mohammad Shahzad and Ihsanullah Janat, completed Zimbabwe’s humiliation by thrashing off the 135 runs needed to win in 21 overs without loss, scoring at more than a run a ball.

Cremer kept a measure of control, but all the other bowlers suffered severe punishment, especially Kyle Jarvis, who went for 23 runs off his three overs.

Shahzad finished unbeaten with 75 and Ihsanullah with 51.

Zimbabwe did not look a shadow of the team that won so superbly last Sunday.

They have the final match of the series, to be played on Monday, to regroup and try to regain some respect.