Gukurahundi Not Mere ‘Disturbances’, But Genocide 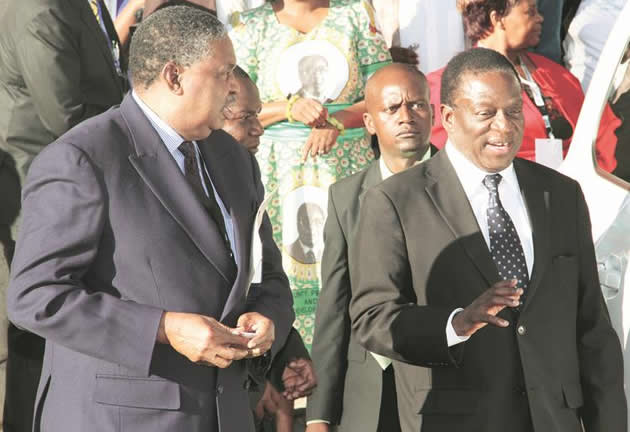 It was not only shocking, but bewildering, to read – in a recent edition of the state-run The Herald newspaper – that Zimbabwe Vice President Phelekezela Mphoko recklessly referred to the Gukurahundi massacres of the 1980s as ‘disturbances’.

A quick search in my trusty dictionary revealed that a ‘disturbance’ was defined as, ‘ the interruption of a settled and peaceful condition’.

The first thing that came to my mind after reading this definition was a brawl at a party – when two or so people fiercely argue over something and end up in a fist fight.

That is clearly a ‘disturbance’.

However, the deliberate killing of nearly 50,000 people mainly of a particular ethnic group can never be described as a ‘disturbance’, but is unequivocally ‘genocide’.

‘Genocide’, is thus defined as, ‘the deliberate killing of a large group of people, especially those of a particular nation or ethnic group’.

As such, if I were to ask VP Mphoko to honestly choose between the two definitions of ‘disturbances’ and ‘genocide’ to describe what happened during Gukurahundi, which would he consider most appropriate?

The man would be clearly disingenuous if he were to deny that what happened in the Matabeleland and parts of the Midlands provinces of Zimbabwe in the 1980s was a genocide – and he should be man enough to admit it.

What is more disturbing is that he was one of the high ranking officials of ZAPU during those days – a party that was also the target of these atrocities during Gukurahundi.

Not only that, but also he is of the ethnic group that was targeted by the ZANU PF government and its North Korean trained 5th Brigade in the genocide.

Does he have some sort of selective amnesia?

Or does his hypocritical statements reveal something else more sinister, as selling his soul on the altar of power and money, as he has chosen to join ranks with the very people who killed his own kith and kin?

Is that what is meant by ‘the love of money is the root of all evil’?

Mphoko’s trivialisation of the genocide is betrayal of the highest order.

That genocide is recognised as such – a genocide, and it is not referred to as ‘the 1994 disturbances’.

That does not mean that those two ethnic groups in Rwanda have not largely reconciled, but in fact, the acknowledgement by both groups that what happened was a genocide helped in the tough reconciliation and healing process.

The same is needed in Zimbabwe.

We expect leaders such as VP Mphoko – who is also responsible for the peace and reconciliation ministry – to be in the forefront in calling for the official recognition of Gukurahundi as what it is – a genocide.

There will never be true reconciliation in Zimbabwe unless the ZANU PF government acknowledges that it committed genocide against mainly the Ndebele ethnic group, and apologises.

Mphoko’s feeble and shameful attempts to portray President Robert Mugabe’s ‘moment of madness’ statement as an apology, should be treated with the scorn they deserve.

Those who bore the brunt of Gukurahundi deserve and expect a genuine apology from those who perpetrated these atrocities – and nothing short will do.

Any form of reconciliation – even in a family – starts off with an apology and acknowledgement, then the rest follows.

An apology is not a sign of weakness, but of strength, as it takes more courage to apologise than to remain defiant.

The ZANU PF government should now show that it has courageous men and women who are prepared to come forth and acknowledge and apologise for what they did.

This is not opening old wounds, but an exercise in true reconciliation.

The longer someone pretends that they never wronged another, the more the wronged party becomes enraged.

Trivialising the genocide will only make matters worse, as this only serves to further anger those who were affected.

Moreover, shifting the blame onto a third party – particularly, Western countries, without proffering any shred of evidence – further worsens an already critical situation.

Can Mphoko please explain to the nation exactly how Western countries were involved in the 1980s genocide?

The atrocities were undoubtedly one-sided, as such, the only other foreign entity that I know of was North Korea, which trained the 5th Brigade – other than that, would Mphoko care to enlighten us all.

It should be made very clear that there was no civil war going on in Zimbabwe at that time.

This was an army that was deployed to massacre innocent civilians.

It also had absolutely nothing to do with the so-called ‘dissidents’.

If Mphoko is trying to covertly suggest that the ‘dissidents’ – who barely numbered much – were Western-backed, that still does not explain why the ZANU PF government deemed it prudent to deploy the notorious 5th Brigade to massacre nearly 50,000 innocent men, women, and children.

What did Western governments have to do with that?

As the VP was busy officiating at the launch of the national identification programme in Tsholotsho, so as to provide ID cards to those who lost their parents to the genocide, did he bother to be apathetic enough to consider how they felt as he trivialised what happened to their parents as mere ‘disturbances’?

When he was talking about reburying victims of Gukurahundi, and mass graves, did it ever occur to him that these were more than just ‘disturbances’?

As a member of both government and the ethnic group that was targeted in the Gukurahundi genocide, Mphoko should now step up and do the right thing.

He should stop placing his personal and selfish political power ambitions ahead of his own people and national responsibility.

We expect him to be the trailblazer in pushing for the official recognition of what happened in the 1980s as genocide.

Even Germany officially recognised, decades ago, that what they did under Adolf Hitler and the Nazis was a Holocaust.

It is actually a punishable crime to deny the Holocaust in Germany, and the West at large.

The same approach is required for Zimbabwe, as we need official policy that also makes it a punishable crime to deny the 1980s Gukurahundi as genocide.

The acknowledgment should be accompanied by an official apology from the president himself – as head of state and government, and commander in chief of the defence forces, both today and during the massacres.

Compensation will then be discussed with those affected by the genocide.

That is the only serious way to genuine peace and reconciliation in post-independence Zimbabwe – if ever we are to avoid a reversal of the genocide in the future.

It is very unfortunate that ZANU PF’s divisive racist and tribalist policies sought to give the impression that they represented the Shona, which they clearly did not.

This is ingrained in a significant portion of those affected by the genocide to view it as having been a Shona against Ndebele massacre – in the same mould as the Rwandan Hutu against Tutsi genocide.

It is evidently not true, as it was solely a ZANU PF massacre of the Ndebele, and it is that party that must be held to account.

The time has come for leaders as Mphoko to show that they are true leaders who will stand by those that they proclaim to be one with.

They need to stop trivializing the genocide, and be seen to be in government not for self-aggrandizement, but to be the true voices of the victims of the Gukurahundi, and that they finally receive justice.

The writer, Tendai Ruben Mbofana is Programmes Director at the Zimbabwe Network for Social Justice (ZimJustice). Please WhatsApp/call: +263782283975, or email: [email protected] Please ‘Like’ the ZimJustice page on Facebook for updates.

Dress Code Cannot be an Excuse for Rape!