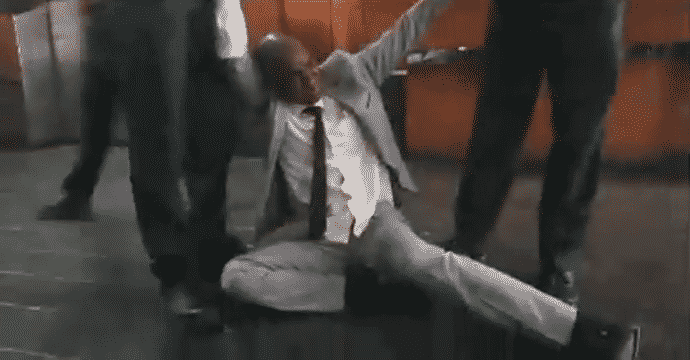 The Douglas Mwonzora led MDC-T says it is investigating circumstances surrounding the harassment of Kudzanai Mashumba, a member of the opposition outfit who was manhandled by party youths while addressing a press briefing in Harare today.

Mashumba had gathered journalists at the Media Centre when partys youths led by legislator Yvonne Musarurwa stormed into the room and ordered him to stop resulting in a scuffle.

He was dragged downstairs from where he shouted “They are beating me because I want to expose their corruption.”

However, in an interview with 263Chat, MDC-T national spokesperson Witness Dube said they are investigating the incident and had only come to know of the presser through social media.

“As a party we are still investigating what happened at the Media Centre but what I can tell you off hand already is that we saw an advert for press conference earlier today on social media through twitter to be specific and members of our party attended that press conference innocently because it had the face of our president.

“It purported to have been called for by our party leadership so upon attendance we understand that one former member of the party then made himself the centre of that press conference and yet unknown member of the public wanted to assault Kudzanai Mashumba  resulting in our youth leader Yvonne Musarurwa intervening to save the situation first by stopping Mashumba from  proceeding with his press conference at a risk of being assaulted by members of the public who were  greatly aggrieved  by his masquerading as a leadership of the MDC-T.

“Secondly by actually escorting him under the security of the MDC-T youth assembly so in short we believe our youth assembly saved the day for Kudzanai Mashumba as they escorted him out of the so called presser which we are still to establish who had convened it, if its Mashumba himself who was he going to address with but we implore the police to fully investigate the matter and come to the bottom of it.” said Dube

He said the youth assembly made a timely intervention in averting the situation which could have turned nasty.

“If there were incidents of violence, assault on any person they must be brought to book and the perpetrators named and dealt with according to our law. This is our position at the moment but we believe that the youth assembly in a nutshell made a timely intervention that saved the situation from degenerating into total chaos.” he said