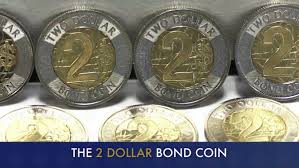 Local banks started the issuance of the new Zimbabwean dollar coins and notes as of this morning following a ZWL$30 million allocation to banks by the Reserve Bank of Zimbabwe (RBZ), 263Chat Business can report.

The new notes are expected to ease liquidity crisis in the market resulting in people paying more to get cash which is usually sold at a premium on the black market.

A survey by this publication revealed that most bank clients were being issued the new ZWL$2 coins with notes less visible.

The withdrawal caps however, remain stuck at $ 50 at most banks in line with RBZ drip-feed strategy of the new cash to monitor new money effects in the market.

“I have just received the new cash in $2 coins. I’m however saddened that we came here with high hopes of securing all our money but they still restrict us to just $ 50. What tangible thing can I buy with $ 50?,” said Allan Kodzaimaoko, who had just come out of one banking hall.

The Central Bank announced that it will still cap the weekly withdrawal limit at $ 300 in order to maintain money supply balance in the economy and only up until a time it feels the economy is in balance it will then raise the limit.

Authorities also say banks are expected to start feeding the cash into the automated teller machines (ATMs) soon to improve convenience for customers.

Zimbabwe has been reeling from serious cash shortages for over two years now but the Central Bank intends to increase cash threshold from current levels of four percent of broad money supply to just above 10 percent.

The shortage of cash has been creating serious problems in the economy, hence high cash premium were being set against all forms of electronic money transactions.

This has had adverse effects particularly on the exchange rates.

But analysts are skeptical of monetary authorities’ remedial action citing deficiency of confidence in the banking sector as the biggest threat to the economy.

“Money moves from formal to informal sector; it gets trapped there,” RBZ Governor, Dr Mangudya conceded.

Some have also raised concern of the small quantities of notes in a market in hyperinflationary mode.

Zimbabwe’s economy is predominantly informal, making it difficult for money to circulate in the formal banking channels and this is a challenge authorities will have to urgently address to bring stability in the financial sector.